Nets Daily: Milestone #1 from NetsPR With his first six points tonight, James Harden (3,120 points) has moved past Dennis Johnson (3,116) into 22nd in NBA Playoff history in points scored. Next up: Paul Pierce (3,180).
4 months ago – via Twitter NetsDaily

share
tweet
send
sms
email
RAY: Your team had a run of great seasons but never won a championship. I think your last five seasons, the Bucks finished first in the conference. You had a great collection of players, including the ones who came in the trade for Kareem. Marques Johnson: Yeah, we had it going on. We started out green and kept growing. The only problem was that we either had to go through the Boston Celtics with Larry Bird, Kevin McHale, Robert Parish (and later Dennis Johnson) and that crew, or the Philadelphia 76ers and Dr. J., Bobby Jones, Maurice Cheeks and Andrew Toney, aka. the Boston Strangler. The year that we were really primed to make a championship run, the Sixers had picked up Moses Malone in the offseason.
1 year ago – via bballwriters.com

share
tweet
send
sms
email
Mark Bartelstein, now one of the most powerful agents in the NBA, was just beginning his career when he walked into the Hyatt in Lincolnwood, just outside Chicago, for his engagement party on April 20, 1986 — a Sunday afternoon. Bartelstein had a problem. His beloved Chicago Bulls were about to tip off Game 2 of their first-round series against the juggernaut Boston Celtics. Jordan, Chicago’s second-year star, had scored 49 points in Game 1 — a Boston win — after barely playing that season due to a broken foot. Bartelstein approached the bartender and asked if he might turn on the game. The bartender replied that he couldn’t, because a large party had booked the room. “I couldn’t leave the bar,” Bartelstein said. “It was the greatest performance I’ve ever seen. It still is.” “It’s my party,” Bartelstein said. On the game went. Jordan started on fire, torching Dennis Johnson, and then Danny Ainge, and then two and three Boston defenders at once.
1 year ago – via Zach Lowe @ ESPN

share
tweet
send
sms
email
At some point, Bartelstein’s future mother-in-law approached and stressed to Bartelstein the importance of attending his own engagement party. “I said, ‘OK, hold on, this is crazy, Jordan is going off,'” Bartelstein recalled, laughing. He never made it to the party. His mother-in-law did not talk to him again until the wedding months later, Bartelstein said. Other members of his new extended family held out even longer.
1 year ago – via Zach Lowe @ ESPN 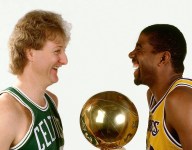 These are the Top 25 scorers in NBA Finals history 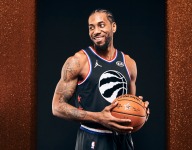