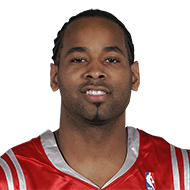 Position: -
Born: 07/18/74
Height: 6-5 / 1.96
Weight:195 lbs. / 88.5 kg.
Earnings: $58,973,127 ($93,394,092*)
0 share
share
tweet
pin
sms
send
email
Anderson grew up in a crime-infested part of Louisville, was abandoned by his parents by the time he was a teenager, became a father at age 14, sold junk food from a truck to support himself and slept wherever he was welcome until an aunt and uncle took him in. Those experiences didn’t prevent him from winning championships at both the collegiate (Kentucky) and professional levels (the Miami Heat). But Anderson believes that he would’ve made more of his career, and better decisions, had he sought more positive ways to confront the challenges that came his way. “I was going through stuff and they was like, ‘You’ve got to toughen up. You’re not serious about basketball,’ ” Anderson said of the climate when he played from 1997 to 2008. “No one felt you could speak your truth back then. You could lose a family member and it’ll really hurt you and they want you back at work in a few days. It was rough back then.
8 months ago – via Michael Lee @ Washington Post

Minnesota Timberwolves guard and Louisville native D’Angelo Russell is hosting his first basketball camp this week. “I remember being in this position — the same position these kids are in now,” Russell said. “I remember guys like [Rajon] Rondo and Derek Anderson, guys like that, giving back to young hoopers like myself.”
1 year ago – via Dyuce Woodson @ wlky.com 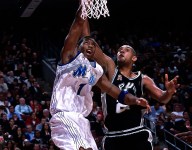 Earlier in his career, Dudley, 33, learned from veterans such as Derek Anderson with the Charlotte Bobcats and Steve Nash, Grant Hill and Jason Richardson with the Phoenix Suns. Anderson was at the end of his career and showed Dudley the importance of professionalism and how to conduct himself with coaches. Richardson’s mentality on the court in the prime of his career registered with Dudley. On the team bus and planes, Dudley spent time with Nash and Hill and picked up keys to longevity in the NBA as an older veteran. During timeouts, Dudley is usually doing lunges and squats to activate his muscles. It’s a similar routine to Nash’s from their time together in Phoenix.
4 years ago – via The Athletic 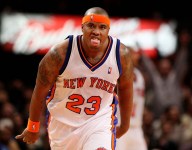 StatMuse: Damian Lillard joined Derek Anderson (2003) as the only @Portland Trail Blazers PGs with 30p/10r in a game since 1985-86. statm.us/e/6yeAAqgF0
6 years ago – via Twitter statmuse

share
tweet
send
sms
email
You were abandoned by your parents at a young age and have spoken of how you stayed positive by keeping busy. Most others in that situation would probably crumble under the circumstances, but not you. How did you keep your head up? Derek Anderson: Staying busy and working then is how I avoided getting in trouble. That alone let me know that if I stayed busy and did something, I wouldn’t have to be explaining to all the drug dealers and gang-bangers and others that why I wasn’t joining them was “I’ve got to go to work. I have to go play basketball,” and that was kind of my excuse and was a way I got to utilize all my time when everyone else was hanging around. Everyone else saw me going to work at a candy store, delivering papers or playing basketball. I basically said at age 13 or 14, “I’m going to do a routine,” so I was basically like a machine. I just did everything the same and never changed. I’m almost the same way now. I just do what I do every single day and that way I stay committed to finishing what I started and I’ve always been busy.
6 years ago – via Forbes.com