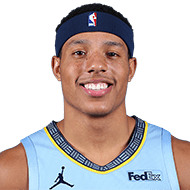 Richmond’s NBA superstar is giving back to his hometown following a very successful rookie season. Desmond Bane has set up a website to help Richmond by enabling the purchase of merchandise. Portions of the proceeds then are given to charitable organizations. The website is desmond-bane.com.
2 weeks ago – via Envisionwise Website Service @ Kicks 96 WQLK-FM

Grizzlies guard Desmond Bane never got to experience it himself. For him, the idea of meeting an NBA player was wishful thinking. “That was my dream,” said Bane, who averaged 9.2 points per game as a rookie last season. “I always wanted to meet one. You would see those things and it was almost like a fairy tale to me. You see those guys who make it to the NBA and give back to the community – the guys who are always around – and that was something I knew happened, but I never got to experience. So now I’m trying to make sure that the people here and the people back in Indiana get to experience those things.”
3 weeks ago – via Drew Hill @ Daily Memphian

share
tweet
send
sms
email
Bane is part of a back-to-school drive in Memphis that will provide backpacks and school supplies for 200 students in the area. He plans to do the same for his hometown of Richmond, Indiana. “This was an opportunity I wish I had as a kid,” Bane said prior to the drive. “Me and some of my friends, when we were growing up, we didn’t always have it the greatest. So just to be able to be in this position that myself and some of my teammates are in, to be able to give back and put smiles on kids’ faces and get them excited – to give them a chance to be around successful people and see that it’s possible – that’s huge.”
3 weeks ago – via Drew Hill @ Daily Memphian

share
tweet
send
sms
email
He has felt the city’s embrace from the start. “No question,” Bane said. “It started as soon as I touched down after the draft. It started with Coach (Taylor) Jenkins and the Grizzlies organization, of course. But as soon as I got to the hotel, people started bringing me gear and welcoming me with open arms. I’m thrilled to be a part of this team and be a part of Memphis.”
3 weeks ago – via Drew Hill @ Daily Memphian

Drew Hill: Desmond Bane is giving away backpacks and school supplies to 200 local students this Saturday outside of FedExForum.
3 weeks ago – via Twitter DrewHill_DM

At 6’5″ and 216 pounds, Bane is significantly bigger than most NBA guards. However, he got his “Welcome to the NBA” moment from none other than Los Angeles Lakers star LeBron James. Bane explained what the moment entailed, via Quenton Albertie of SLAM:
1 month ago – via Sanjesh Singh @ lebronwire.usatoday.com

share
tweet
send
sms
email
“Bron! For sure! Bron! I mean the first time that we played the Lakers. We played the Lakers about, I would say, five games, six games into the season, so it was still early on, I’m getting a feel for things. And we had played I think maybe one playoff team—one or two playoff teams—and, you know, they were coming off a championship and being hungry for another one. I think that that was my real “Welcome to the NBA” moment. There was stretches when I guarding LeBron and I was like man, “this dude is so damn big.”
1 month ago – via Sanjesh Singh @ lebronwire.usatoday.com