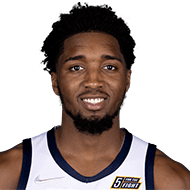 Members of the Black community in Utah are grateful for Mitchell keeping the pressure on the public to embrace dialogue. “To have someone that has a platform like that, it allows them to reach the masses even further, to reach the everyday person,” said Meligha Garfield, director of the Black Cultural Center at the University of Utah. “That’s why I praise. Use your platform, brother.” In that sense, he’s not alone. “It’s always been important to me,” Conley told The Athletic. “Not only as an African-American, a father and a husband, but as a role model. Because of the platform that I have, I try to set a good example, for Black, White, any race. And I want to bring to light to educate certain people on certain situations. Because a lot of things that go wrong in this world, there’s a lot of ignorance behind it. People don’t know, so they just react. I’ve always been a proponent on speaking my truth. I want to educate as much as I can, and open some eyes in the process.”
27 mins ago – via Tony Jones, Christopher Kamrani, Tony Jones and Christopher Kamrani @ The Athletic

Storyline: Social Justice Messages
share
tweet
send
sms
email
Eric Walden: Donovan Mitchell, on the Jazz having had six ejections already this season: “I guess we’ve been waking up on the wrong side of the pillow. Is that the expression?”
1 week ago – via Twitter tribjazz

“I can’t even lie, I was just focused on getting out of the way,” Donovan Mitchell said. “I didn’t pay attention to anybody else. Just, no parts. I wanted no parts of that.” Jordan Clarkson and Hassan Whiteside were two of the first Jazz players to notice the fan and what he had produced. “He was just throwing up continuously,” Clarkson said.
2 weeks ago – via Sarah Todd @ deseret.com

Eric Walden: Donovan Mitchell, asked to comment on the return tonight of former teammate Georges Niang, sarcastically sighs and replies, “THAT guy.” Then, after extolling the virtues of Georges’ attitude and work ethic, he concludes, “And now we have to go out and kick his ass.”
2 weeks ago – via Twitter tribjazz

“Keep going, bro. You’re going to play so long that people are going to forget we even played together.” – Dwyane Wade on former co-star LeBron James in 19th season. Wade sits down with @Stadium: LeBron, communication being key with Utah-Donovan Mitchell, new Memoir, more. pic.twitter.com/6V6NMLY9lH