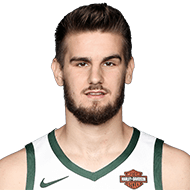 Dragan Bender will stay in Tel Aviv at least until the end of the 2020-21 season, as Maccabi Playtica Tel Aviv has officially announced. Bender was signed initially with a short-term deal which included an extension option.
6 months ago – via EuroHoops.net

Maccabi Playtika Tel Aviv signed Dragan Bender to a three-month contract with an option for the remainder of the 2020-21 season, the Israeli powerhouse announced Sunday confirming previous reports. Bender, 22, was with the Yellows from 2014 to 2016 prior to making the NBA jump. Deciding to return at least until December brings him back to the Turkish Airlines EuroLeague after his seven 2015-16 appearances and to the Israeli league as well.
9 months ago – via EuroHoops.net

Nemanja Zoric: Breaking: Dragan Bender has signed with Maccabi Tel Aviv, Bender will replce Quincy Acy who left the team. The Croatian is back to Tel Aviv after 4 years in US, Source confirmed.
9 months ago – via Twitter

Dragan Bender — A monumental bust as the fourth overall pick in 2016, Bender still has a chance to make it. Believe it or not, he’s only 22. The Bucks reluctantly waived him when Marvin Williams became available, and he had played serviceably on a 10-day contract with Golden State when the league shut down. I’d expect the Warriors to sign him to a multi-year deal similar to the ones Mychal Mulder and Juan Toscano-Anderson inked.
1 year ago – via John Hollinger @ The Athletic

A league source said the Warriors have Wiseman at the top of their draft board; understandable considering forward Dragan Bender, a late-season addition via two 10-day contracts, is the only 7-footer on the roster and 6’9″ Kevon Looney is the only listed center. But none of the executives surveyed put Wiseman in the category of Dwight Howard or even Deandre Ayton, big men capable of playing a significant role on Day 1.
1 year ago – via Ric Bucher @ Bleacher Report

share
tweet
send
sms
email
Bobby Marks: Golden State is now $310K below the luxury tax after the Mychal Mulder contract. The Chasson Randle 10-Day expires on Thursday and Dragan Bender on Saturday. There is a $91,557 tax hit for every 10-Day signed. A Bender rest of the season contract on Sunday would cost $293K.
1 year ago – via Twitter BobbyMarks42

Logan Murdock: Dragan Bender has been signed to a second 10-day contract, Warriors announce.
1 year ago – via Twitter loganmmurdock