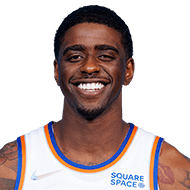 The New York Knicks announced today that the team has signed guard Brandon Goodwin. Terms of the deal were not disclosed. The team has also waived guard Dwayne Bacon.
1 week ago – via NBA.com

Fred Katz: The Knicks are waiving Dwayne Bacon, league sources tell @TheAthletic. Bacon was on a non-guaranteed contract. Knicks still have 14 guaranteed guys on the roster, one below the max.
1 week ago – via Twitter FredKatz

When the Knicks signed Orlando swingman Dwayne Bacon after he was waived earlier this month, it figured he’d be part of the 15-man roster when the season kicked off Oct. 20 versus Boston. But that seems less certain, considering the way Bacon’s contract reads. According to an NBA source, Bacon signed a one-year non-guaranteed Exhibit 10 deal after being a starter for the Magic last season, playing in all 72 games.
2 months ago – via Marc Berman @ New York Post

share
tweet
send
sms
email
If Bacon, who turns 26 on Monday, is cut, he will get a $50,000 guarantee if he plays with the Westchester Knicks of the G-League. There’s a chance the final roster spot will become a battle between Bacon and Argentine combo guard Luca Vildoza, who has a four-year, $13.6 million non-guaranteed deal. Vildoza, 25, already got paid for the first season despite signing in May. Bacon is a Creative Artists Agency client — team president Leon Rose’s former firm. But multiple sources contend the Knicks are taking a flier on Bacon because of Tom Thibodeau’s close friend, Steve Clifford, the former Charlotte and Orlando coach who now is a Nets consultant.
2 months ago – via Marc Berman @ New York Post

Ian Begley: Dwayne Bacon’s contract with the Knicks has an Exhibit 10 clause, which provides a financial incentive for a player to join a team’s G League affiliate if the player doesn’t make the NBA roster out of training camp. (New York’s G League team is the Westchester Knicks).
2 months ago – via Twitter IanBegley

Ian Begley: Dwayne Bacon and Aamir Simms signed deals with the Knicks yesterday, per the NBA transaction page.
2 months ago – via Twitter IanBegley