share
tweet
send
sms
email
Anderson remembers being a rookie for New Orleans and watching veteran teammate Eduardo Najera going all out in practice. He recently found an old quote from Najera saying he wanted to make a group of young players better, including Anderson. A decade later, Anderson is Phoenix’s Najera. “Right now, it’s elevating these young guys. It’s not about Ryan Anderson,” he said.
4 years ago – via Arizona Republic

share
tweet
send
sms
email
The Nuggets are likely to get back into the D-League business next season, according to league sources. But nothing has been decided or is imminent. Right now, the Nuggets are not affiliated with a team but can assign players to a D-League team connected to another NBA team. It has been seven years since the Nuggets last had a D-League team all to themselves. Those were the Colorado 14ers, a team that relocated to Frisco, Texas, in 2009 and became the Texas Legends. The Legends are affiliated with the Dallas Mavericks and are coached by former Nugget Eduardo Najera.
6 years ago – via Denver Post

Storyline: G League Expansion
share
tweet
send
sms
email
Eduardo Najera, the former star Oklahoma player who went on to have a 12-year NBA career, is doing the Oklahoma Team Stream broadcast for tonight’s Final Four matchup. Najera is currently working for the Mavericks as a scout and also does pre-game and post-game television work on Mavericks broadcasts. When Buddy Hield was called for a charge, Najera disagreed and took time out of calling the game to very loudly yell at the officials. “Come on. He was moving. That’s a block.”
6 years ago – via The Big Lead 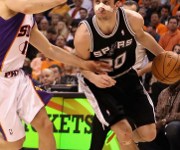 The Top 25 players ever from the Americas

Dallas Mavericks owner Mark Cuban believes Eduardo Najera will make an excellent NBA coach. Najera is in his second season as the coach of the Texas Legends of the NBA D-league, but has aspirations of moving up to the NBA. “I think being in the D-League has given him great experience and he recognizes a lot of the elements of what it takes to be successful,” Cuban said before Friday’s Mavs-Miami Heat game. “He’s open-minded, he’s bright, he knows the game, he relates well to players, so he’s definitely got a chance to be a great NBA coach. “I know that’s in his DNA and that’s what he wants.”
9 years ago – via Fort Worth Star-Telegram