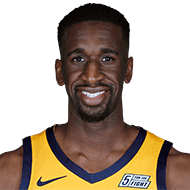 After Ekpe Udoh’s “dramatic” injury against Tortona, Italian defending champion Virtus Bologna is considering Jordan Bell as a replacement for the former Fenerbahce center, according to Corriere di Bologna
1 year ago – via Sportando

share
tweet
send
sms
email
Virtus Bologna’s win over LBA newcomer Tortona in SuperCup Quarterfinal game yesterday night was overshadowed by a serious injury occurred to Nigerian center Ekpe Udoh, who appears to have injured his patellar tendon in a no-contact situation. Former Fenerbahce center was taken out of the court in a stretcher and after the game coach Sergio Scariolo confirmed the seriousness of the injury, adding that the team will look for a replacement in the market: “He’s our cornerstone, both on attack and on defense. It’s dramatic, I hope that it serves to understand that you need to respect the players. Here there are stickers on the court everywhere, in the NBA it’s not the case. We will look for a replacement”.
1 year ago – via Sportando

Storyline: Ekpe Udoh Injury
share
tweet
send
sms
email
“We are in shock and worried,” Scariolo said after the game on Udoh’s injury. The Italian coach spoke against the use of slippery stickers on basketball floors which have often caused players to hurt themselves.
1 year ago – via EuroHoops.net

share
tweet
send
sms
email
Virtus Bologna is in advanced talks with Ekpe Udoh as reported by the Bologna’s newspaper this morning. The Italian Champions would have passed Partizan and Zeljko Obradovic in the race to the Nigerian big man and the agreement would be close.
1 year ago – via Sportando