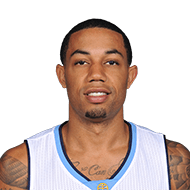 share
tweet
send
sms
email
Olympiacos has decided to part ways with Erick Green, while the Reds are waiting the Spurs’ decision for Nikola Milutinov.
4 years ago – via EuroHoops.net

Green had previously played in Euroleague during 2013/2014 (with Montepaschi Siena), before getting his first NBA contract, with the Denver Nuggets. And he has no problem admitting to Eurohoops, that returning to the best league in the world, is among his top ambitions. “I think that my decision to join Olympiacos can skyrocket my career. I believe it will help me return to the NBA. I am a part of a great organization. I have excellent teammates, I will play in Euroleague, the second biggest league in the planet, and I’ll prove that I can do important things at the top level of basketball.”
5 years ago – via EuroHoops.net

share
tweet
send
sms
email
Chris Reichert: Erick Green (Reno Bighorns in 15/16) will be at Las Vegas SL with the Portland Trail Blazers, per a league source
5 years ago – via Twitter Chris_Reichert

Alex Kennedy: Blazers are having multiple FA mini-camps and saying they may sign multiple guys. Russ Smith, Erick Green, Dwight Buycks were at first camp.
5 years ago – via Twitter AlexKennedyNBA