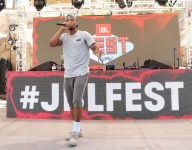 What was Plan B for players if their NBA career didn't work out?

Nikos Varlas: #BSL @CJ McCollum traveled to Turkey and he is watching live his brother @ErrickM3 in Game 1 of the semifinals between @AnadoluEfesSK and @TofasSporKulubu
4 years ago – via Twitter Eurohoopsnet

share
tweet
send
sms
email
The former Galatasaray guard at the point has no deal in place and as he explained he will not make up his mind until after the end of his season in the Chinse CBA. “I make no agreements or sign nothing with any teams”, said Errick McCollum. “I am focused on finishing my season in China and then I will take the next step as far as where I chose to play”.
5 years ago – via EuroHoops.net

It was on. That was the beginning of a year of preparation for the second annual TBT. In the meantime, to my delight, the prize for was increased from $500,000 to $1 million. The year after that — 2016 — everybody was taken by surprise when it ballooned to $2 million. C.J. and I grew up in a middle class family in Ohio. We always shared big, big basketball dreams. And we shared something else: chips on our shoulders. I distinctly remember my mom calling me at school during my freshman year at Goshen. C.J. was a sophomore at my old high school, and was in his first year starting for the varsity. The adjustment was tough for him in the beginning, so the coach moved him to the sixth-man role. My mom told me that an AAU coach had approached her and told her that C.J. was “at best a D-II player.”
5 years ago – via The Players' Tribune

share
tweet
send
sms
email
C.J. texted me when I was in the locker room. He’d been watching on TV. “I’m proud of you. Keep riding the wave.” For just a moment, I reflected on the last year. C.J. got a big contract from the Trail Blazers. Now I had won TBT for the second consecutive time. That chip on my shoulder? I think it’s still there. To have been counted out and succeed, I think, feels better than never having been counted out at all. You certainly appreciate your success more.
5 years ago – via The Players' Tribune