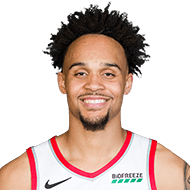 Position: G
Born: 01/18/99
Height: 6-5 / 1.96
Weight:209 lbs. / 94.8 kg.
Salary: $1,663,861
0 share
share
tweet
pin
sms
send
email
Four months after his visit with Bolton in the hospital, Trent achieved his dream of making it to the NBA when he was drafted 37th by the Portland Trail Blazers. Last season, his second, he became a rising star, an ascent punctuated by a breakout performance at the NBA bubble in Orlando. But what people didn’t see were the dark moments during his rookie season when he wasn’t playing much (111 minutes across 15 of the team’s 82 games), and how Bolton was pushing him to continue working, encouraging him that his time was coming and that he needed to be ready when it did.
3 weeks ago – via Jason Quick @ The Athletic

share
tweet
send
sms
email
For the past two years, the grind has been nonstop. Bolton trains six hours a day, six days a week, and in some way, shape or form, Trent has been there. When Trent is in Minnesota, he goes to Bolton’s sessions at the Courage Kenny Rehabilitation Institute and at the Fit 4 Recovery program. “All the trainers know him,” Bolton said. “And he’s always asking the trainers, ‘Is JB working?’”
3 weeks ago – via Jason Quick @ The Athletic

share
tweet
send
sms
email
It wasn’t until last month, though, that I began to fully understand what was behind Trent Jr.’s defense. In the course of reporting a story about the enduring bond between Trent Jr. and his best friend, Jordan Bolton, a telling scene was revealed. When the two were at Apple Valley High school in Minnesota — Bolton a sophomore and Trent Jr. a freshman — they were summoned into a meeting with their basketball coaches. Bolton said it was clear the coaches intended to break the two talented underclassmen.
3 weeks ago – via Jason Quick @ The Athletic

share
tweet
send
sms
email
“They pretty much came at us recklessly,” Bolton said. In particular, they criticized Trent Jr. and his defense. Wave after wave of insults followed. He can’t play D. Didn’t want to play D. And because he didn’t play D, he wasn’t going to play. Eventually, the young Trent Jr. buckled. “He broke down,” Bolton said. “He was crying.”
3 weeks ago – via Jason Quick @ The Athletic

share
tweet
send
sms
email
Today, Trent Jr. doesn’t like talking about that meeting or the tears, but it’s clear that something changed with him. “You know, constantly being told every day that you can’t do something … there’s going to come a point in time where it finally clicks, and you say that’s not going to be the narrative, that’s not how it’s going to be,” Trent Jr. said.
3 weeks ago – via Jason Quick @ The Athletic

share
tweet
send
sms
email
Predictably, Trent Jr. was ambivalent when asked about his stance on an extension. “At the end of the day, it’s a business and the organization and team is going to do whatever they want to do,” Trent Jr. said. “On that, I haven’t put too much thought into it. If it comes, it comes. If it doesn’t, it doesn’t. Like I said, I’m going to work, continue to do what I do and continue to stay ready, because I don’t know when we are coming back. When we do come back, I will be ready and ready to compete for a championship, ready to come back and play hard. “So right now, I’m really not focused too much on it. I control what I can control, and I can’t control that, so I’m going to continue to stay in the gym, work on my craft and continue to get better every single day.”
3 weeks ago – via Jason Quick @ The Athletic