Tim Bontemps: Nick Nurse says it’s likely that Scottie Barnes, Thad Young and Gary Trent are all doubtful for Game 2, but that the team will monitor them all over the next 24 hours and see where things go.
1 month ago – via Twitter TimBontemps 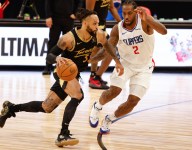 Gary Trent Sr: My son was depressed and sad in Portland

Gary Trent, father of Raptors guard Gary Trent Jr., has shed some light on the latter’s personal struggles in Portland during an appearance on the “Raptors Show with Will Lou.” “My son played with so much pain, and my son was so depressed and so down and so sad in Portland, that watching him play actually used to hurt me,” said the former Raptors forward. “I knew my son wasn’t feeling himself, wasn’t playing his game, he was under a lot of negative pressure [from] negative statements from front-office people.”
3 months ago – via Olivier Neven @ Yahoo! Sports

share
tweet
send
sms
email
“When I come and visit my son now in Toronto, he’s in a much happier place mentally, spiritually, and he smiles more,” he said. “He’s looking forward to practice, he’s looking forward to the games, and I can see the love for the game blossoming within him again.”
3 months ago – via Olivier Neven @ Yahoo! Sports

share
tweet
send
sms
email
Powell, who signed a five-year, $90-million deal with the Blazers in the offseason, was traded to the Los Angeles Clippers on Friday. Trent Sr. did not hold back on Portland’s mismanagement. “They don’t really have a plan, and I don’t think they’ve made the right decisions over there,” the 47-year-old said. “My son is five, six years younger than Norm, which means he’s got a lot more time and a lot more upside, so to me, the Raptors won that deal, and God bless that my son won on that deal to get in a better opportunity.”
3 months ago – via Olivier Neven @ Yahoo! Sports 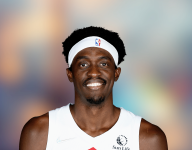