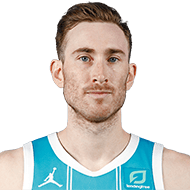 Gordon Hayward hasn’t played since suffering a right foot sprain here on Apr. 2. He won’t play, but is working on the court. pic.twitter.com/ETDcjFIAcU

Marc Stein: The Hornets say Gordon Hayward (sprained foot) is out for Tuesday’s play-in game at Indiana.
4 months ago – via Twitter TheSteinLine

The signings of Rozier and Hayward were criticized as overspends in some NBA circles (and by the media), but Kupchak couldn’t care less. He has been working in the NBA for too long, in some of the largest markets and smallest markets, to give a hoot whether somebody is second-guessing him. “It’s kind of hard to shake me up, you know? There might have been some criticism; I didn’t follow it that closely at the time,” Kupchak said. “But you’ve got to weigh everything: the draft, free-agent signings, trades. You really have to wait four or five years to look back on it and that’s when you know really whether you made a mistake or you didn’t make a mistake. So at the time, I didn’t get the feeling that there was this uproar about overpaying somebody. Maybe there was, but it didn’t really don’t bother me.”
5 months ago – via Chris Sheridan @ basketballnews.com

When asked about the Rozier signing, he explained his thought process. “We believed in a kid. We saw a great opportunity when we were losing Kemba [Walker], who we wanted to keep. And then, for some reason, that made Terry available to do a double sign-and-trade; I think it was the first one that was ever done. It was just a unique opportunity for us to get a young talent. Now, he does continue to get better, and he is a much harder worker than I thought on both sides of the ball. But I’m not surprised that he’s productive. But let’s wait a couple more years and we’ll look back on it, but we’re happy with the signing and it worked out. That’s all.”
5 months ago – via Chris Sheridan @ basketballnews.com