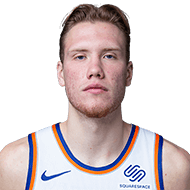 Donatas Urbonas: Ignas Brazdeikis from New York Knicks will be able to hold dual citizenship and acquire Lithuanian passport, after the President of Lithuania Gitanas Nauseda signed the amendments to the Law of Citizenship. Brazdeikis is willing to suit up for Lithuania NT in the nearest future.
3 weeks ago – via Twitter Urbodo

share
tweet
send
sms
email
The March 11 suspension of play, along with the Knicks’ exclusion from the restart bubble, hurt Brazdeikis as much as anyone in the organization. “I was disappointed [by the shutdown] for sure, but I’m patient and persistent,’’ Brazdeikis told The Post in his first remarks since the shutdown. “I’m not going anywhere.’’
3 months ago – via Marc Berman @ New York Post

share
tweet
send
sms
email
Plus, multiple sources have suggested players are finding it difficult to work on their shooting and weight training during the season’s suspension. Brazdeikas, the Knicks rookie, for instance, has been shooting at a hoop in his driveway with his brother.
9 months ago – via Marc Berman @ New York Post

Knicks executive Allan Houston recorded a shooting video for kids via NBA Cares and the Knicks’ website. In addition, rookie Ignas Brazdeikis recorded readings of children’s books for the Garden of Dreams Foundation. And Frank Ntilikina recorded a video for the Garden’s Make a Wish Foundation.
9 months ago – via Marc Berman @ New York Post

The G-League’s regular season was to end Friday and Knicks rookie small forward Ignas Brazdeikis would have gotten his chance, according to sources. With the Westchester Knicks out of the playoffs, April games were expected to be a showcase for the 21-year-old Canadian to show why the Knicks moved up in the second round from 55 to 47 to grab him. “That was the plan — join the team, get an opportunity,’’ an NBA source told The Post. “The Knicks were happy with his development. He kept a real positive mentality, kept his head down and was excited about the opportunity.’’
10 months ago – via Marc Berman @ New York Post

share
tweet
send
sms
email
The coronavirus pandemic, which forced the NBA to suspend its season, ruined that opportunity. Brazdeikis, the former Michigan star, is home in Toronto, working out at a private gym. He’s waiting to find out if his rookie season is done at just nine NBA games played — all brief, garbage-time opportunities. Neither David Fizdale nor Mike Miller gave him a chance as he came in with a reputation as a so-so defender. Brazdeikis averaged 1.9 points in six minutes, shooting 27 percent overall — 1 of 9 from the 3-point line.
10 months ago – via Marc Berman @ New York Post

share
tweet
send
sms
email
Joe Raso, a Toronto-based regional scout for multiple teams and a longtime member of Team Canada’s program, sees Brazdeikis as a legitimate NBA scorer. “When I first saw Ignas play as a youngster at 12, he was a playmaker with size and very high IQ,” Raso told The Post. “As he got older, his offense improved and he flourished in roles of being ‘The Man’ in Michigan and in the G-League. “Many see him as an NBA role player at best. But I believe he has tools to become a major offensive contributor. His job now is to convince his NBA bosses. He’s a multifaceted, physical scorer with size. His IQ makes him a candidate as a player you can play through an offense. He now needs to prove he can defend a few positions. He loves the game. I hope the Knicks stick with him.”
10 months ago – via Marc Berman @ New York Post