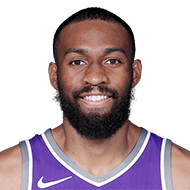 On the first day of training camp to open the 2014-15 season, Giannis wouldn’t crack a smile. Not for a second. He couldn’t, since Jabari Parker was the new star; Giannis was still the curiosity. The two would eventually come to like each other, even become friends, but not at first. Giannis felt like the Bucks were supposed to be his team. He had earned that after the way he played his first season. And he was going to prove that he was the leader.
1 week ago – via Mirin Fader @ The Ringer

share
tweet
send
sms
email
Some fantasized that the pair could become the Batman and Robin of a potential new era in Milwaukee, but Giannis didn’t want to be Robin. He needed to be Batman. “He wasn’t on the throne,” Bucks assistant coach Josh Oppenheimer says, “but the chair was empty. And he wasn’t going to help somebody get there when he thought he had the same amount of ability to get there.” Giannis and Parker went at each other in every drill. Bucks coach Jason Kidd was happy about that; he demanded that competitiveness from everyone. He wasn’t going to accept another humiliating 15-win season.
1 week ago – via Mirin Fader @ The Ringer

share
tweet
send
sms
email
Jabari Parker has a $2.3 million non-guaranteed contract. Parker has a July 31 trigger date that will see his protection increase to $100K. However, with the league year not starting until Aug. 3, expect that date to get pushed back. The salary will increase to $1.1 million if he is not waived by the first game of the regular season. After playing a season-high 15 minutes in each of his first three games as a Celtic, Parker collected six DNPs and has played sparingly.
2 months ago – via Bobby Marks @ ESPN.com

In the past three seasons, Parker has made stops in five new NBA cities, going from Milwaukee to Chicago, to Washington, to Atlanta, and to Sacramento, before arriving in Boston. Throughout it all, he has never given up hope, as he has constantly referenced the valuable basketball/life advice his father once gave him during his youth. “I remember my dad, when I was six years old, pulled me to the side when he saw me giving up on a play and I was walking off, and he told me after that to never give up,” he said Monday morning, just three days after joining the Celtics. “So that pretty much stuck with me, and I’ll never give up and I’ll always give myself a shot.”
3 months ago – via NBA.com

share
tweet
send
sms
email
Boston’s front office had been impressed with Parker’s potential for years, and it still has hope in his career panning out. Danny Ainge and Co. proved such faith Friday by signing the 26-year-old to a multi-year contract. “This is a plan beyond this year and we’re going to be patient in bringing him along,” said head coach Brad Stevens. “We’re looking mostly at him as a guy that can play some 4 for us, but also maybe some small-ball 5 in some lineups, especially around some of our better players as a ball-mover, as a passer, as a playmaker, as a driver, as a guy that can put the ball in the basket and is a real threat to put the ball in the basket. “Hopefully, this is a place where he can re-find his groove. I think that’s important and we’re going to work hard to help him.”
3 months ago – via NBA.com