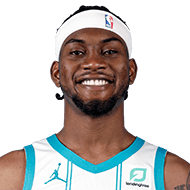 Numbers for Jalen McDaniels are up across the board — he’s averaging nine points, 4.8 rebounds, 2.2 assists and nailing 34.8% of his shots beyond the 3-point line — and his confidence level is at an all-time high. “It feels great because I really know I’m not supposed to be here,” McDaniels said. “Statistics for the second-round, 52nd pick, 54th pick or whatever it was is like, ‘Not supposed to be here, out the league second year.’ That’s what the statistics say. So it’s just me being an underdog. Even in high school I wasn’t recruited like that until my last year. I just know how this goes, I feel like I’ve always got to take the long route every time I do something. When I got drafted …”
2 days ago – via Charlotte Observer

“It’s just good watching the process,” Jaden McDaniels, the younger brother by two years, said. “I’m super proud to see where he’s at, just from coming from a second-round pick, just to be able to go to the G League, do all those other things to get to where he’s at and be in the rotation now, it’s fun to watch. And kind of inspires me to play harder and go harder.” That influence runs deep for little brother, too. “I’d say a lot, just because seeing him get offers in high school and go to college made me want to do those same things,” Jaden McDaniels said. “I kind of wanted to go to the same college as him but he ended up leaving. So when I saw him leave for the draft, I’m like, ‘Shoot, I’m trying to get to where he is and play with him or play against him at one time.’ So, it was all motivation.”
2 days ago – via Charlotte Observer

Rod Boone: No Kelly Oubre, PJ Washington or Cody Martin tonight for the #Hornets vs. the Wizards. Jalen McDaniels will start at power forward.
2 months ago – via Twitter rodboone

Keith Smith: The Charlotte Hornets have exercised their $1.9M team option for Jalen McDaniels for the 2022-23 season, a league source tells @spotrac.
5 months ago – via Twitter KeithSmithNBA

Charlotte’s Cody Martin dunked over Wagner early on and several Hornets, including P.J. Washington, began talking trash from the sideline. Wagner responded on the next possession with a reverse dunk and proceeded to stare down the Hornets bench. That preceded a fourth quarter dustup when Jalen McDaniels fouled R.J. Hampton on a drive. Several players, including Harrell and Lopez, began pushing each other under the basket, but no punches appeared to be thrown. Officials met for more than a minute before the ejections were handed out. “WWE, ain’t nobody fighting,” Rozier said with a laugh. Okeke said coach Jamahl Mosley told Magic players to keep playing after the altercation. “He told us to play the right way and stick together and finish the game out.” he said.
8 months ago – via Steve Reed @ Associated Press