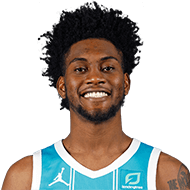 Rick Bonnell: “Jalen did nothing wrong…This is about him getting more reps…This is not a demotion, a failed season for him.” — Hornets coach James Borrego on @wfnz on Jalen McDaniels being assigned to the @greensboroswarm
4 months ago – via Twitter rick_bonnell

Charlotte Hornets President of Basketball Operations and General Manager Mitch Kupchak announced today that the team has recalled forward Caleb Martin and forward Jalen McDaniels from the Greensboro Swarm, the team’s NBA G League affiliate. Caleb Martin returns to the Hornets where he has appeared in four games and averaged 1.8 points, 1.3 rebounds and 0.8 assists in 7.0 minutes per game in his rookie campaign. Martin has appeared in 11 games for the Swarm averaging 17.6 points, 5.2 rebounds, 3.8 assists and 1.3 steals in 33.8 minutes per game. Martin went undrafted in the 2019 NBA Draft and was signed by the Hornets on Oct. 19.
1 year ago – via Quinton Wash @ NBA.com

Shams Charania: Sources: Jalen McDaniels, the 52nd overall pick in June’s NBA draft, has agreed to a partially guaranteed multiyear deal with the Hornets to finalize their 15-man roster. The 6-foot-10 F McDaniels’ length and upside intrigues Charlotte.
2 years ago – via Twitter ShamsCharania

share
tweet
send
sms
email
Charlotte Hornets President of Basketball Operations & General Manager Mitch Kupchak announced today that the team has converted the contract of forward Jalen McDaniels to a two-way contract. The Hornets selected McDaniels with the 52nd overall pick in the 2019 NBA Draft. McDaniels, a 6-10 forward from San Diego State, earned All-Mountain West Second Team in 2018-19 and All-Mountain West Third Team in 2017-18 as a freshman.
2 years ago – via Quinton Wash @ NBA.com