Storyline: Big3 Signings
share
tweet
send
sms
email
“I’m on Kobe’s team, and Kobe is like we are going to pair up in twos — Jannero you are with me,” Pargo said. “I’ve never been paintballing before, so I’m like ‘OK, cool. This is going to be fun.’ Then, they starting shooting the paintballs at us, and Kobe, I kid you not …” Pargo gets intense, and into a crouch. He imitates Kobe pointing back and forth from his eyes to Pargo’s eyes, much like a field general would do with his troops. “He wanted to win,” Pargo said. “He did not want to lose. And it was Kobe, so you could not hesitate. When Kobe said go, I gotta go.” Udoka ended up getting pelted multiple times on his arm. Pargo got plastered in the back by Slava Medvedenko. But when the paint stopped flying, only one team was left standing: Kobe’s.
3 years ago – via Jason Quick @ The Athletic 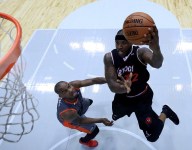 Rashad McCants opens up about his NBA career, new gig in the BIG3 and more