Position: -
Born: 11/25/81
Height: 6-11 / 2.11
Weight:240 lbs. / 108.9 kg.
Earnings: $40,528,625 ($50,063,476*)
0 share
share
tweet
pin
sms
send
email
Jared Jeffries was Jordan’s teammate on the Wizards in the early 2000s and remains friends with him. While appearing on the ‘Wizards Talk’ podcast, he told an offseason story involving former NBA All-Star Antoine Walker. “We were in Chicago at [trainer] Tim Grover’s gym. Antoine Walker pulls up in some Ferrari and he was like he just got it. M.J. was like ‘you know what? I’m gonna bring a different color Ferrari every day this week with a matching Jumpman jumpsuit.’ Bro, he pulled up in a Ferrari with a matching Jumpman jumpsuit for the whole five days we were playing. That’s the kind of swag he had,” Jeffries said.
1 year ago – via Chase Hughes @ NBC Sports

share
tweet
send
sms
email
Imagine one-upping someone’s brand new Ferrari with a fleet of Ferraris. Jordan had to win whether it was on the court or in life. “Just his swagger that never goes anywhere. It’s the realest form of confidence that I’ve ever seen from a person,” Jeffries said.
1 year ago – via Chase Hughes @ NBC Sports 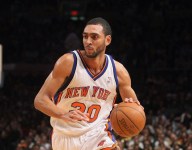 Jared Jeffries, the former Nuggets scouting director and ex-Knicks forward, told The Post that Emmanuel Mudiay desperately needed out of Denver before his entire career was shot. “I know how tough it was for [general manager] Tim [Connelly] and [owner] Josh [Kroenke] to let him go,’’ Jeffries told The Post in a phone interview. “They did the right thing for the kid. They could’ve held on to him to the point of no return and ruin his career. It’s really good the Knicks trusted what they believed at draft time and got him for a discount. If he’s on top of the world and playing great, you’re not going to get him for that.”
4 years ago – via New York Post

share
tweet
send
sms
email
“He’s not a bad shooter — he’s a bad finisher,’’ Jared Jeffries said. “That’s why his field-goal percentage is a big focus. If he becomes a better finisher — something very possible — his whole game transforms. Take out his layups, he’s not a bad shooter. If he’d finish at a 60 percent clip, he’d be 48 [percent] from the floor.” Indeed, Emmanuel Mudiay is fourth-worst in the league in field goal percentage on layups (45 percent). Mudiay also happens to be a good free-throw shooter (80 percent this season).
4 years ago – via New York Post 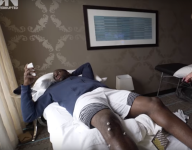 Former NBA Veteran and Front Office Exec Jared Jeffries Joins Echo Fox as President We are excited to announce the appointment of former NBA veteran Jared Jeffries as President of Echo Fox! Jeffries will join the organization and assume responsibility for Echo Fox operations including player recruiting and team development. “Jared Jeffries is a proven winner and fierce competitor on and off the court,” said Rick Fox, 3-time NBA champion and VVP partner. “We cannot be more excited to have someone with his pedigree as a professional player and front office executive help lead Echo Fox as it continues its ascension to the number one esports organization in the world.”
4 years ago – via Echo Fox