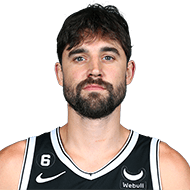 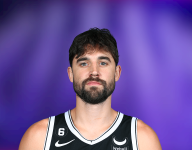 Nets actively looking for upgrades ahead of trade deadline, Joe Harris, Curry, Mills could be involved in trades

But Brooklyn isn’t being complacent ahead of the trade deadline. League sources say the Nets are one of the teams more actively looking for upgrades before the stretch run. Joe Harris ($18.6 million), Seth Curry ($8.5 million), and Patty Mills ($6.5 million) could be involved in trades because of their short-term salaries and the fact that they’ve been playing lesser roles lately.
5 days ago – via Kevin O'Connor @ The Ringer

“It’s a point of emphasis for everybody,” Joe Harris said Saturday as the Nets prepared to host the Thunder on Sunday. “The shot selection — when Kevin’s out, we’re not as efficient in the midrange. He makes it look like it’s really easy, but it’s not an easy look. Not a lot of us shoot them at a really efficient clip. So we’ve got to try to flip — I think we took like 32 midrange shots last game. We’ve gotta lean more on more rim attempts and more threes.”
2 weeks ago – via Greg Joyce @ New York Post

share
tweet
send
sms
email
“Brooklyn is going to be active,” said Woj. “They’re going to look to upgrade. I think particularly as Richard [Jefferson] said, in the front court. What the Nets get to do now is evaluate their roster without Kevin Durant. who has been such a dominant force for them. You mention Kyrie Irving leading the way now with this team. T.J. Warren was brought in to be a really productive player offensively. He gets that opportunity now. Seth Curry, Joe Harris. So now, Brooklyn has some time to see how these players play to see before they have to make some decisions.”
3 weeks ago – via Net Income @ NetsDaily

One Eastern Conference executive shared with Heavy Sports where things stand with Atlanta and Collins and the likelihood that the Nets would be able to get a deal done for the sixth-year forward.  “What you are seeing with Collins now is that the Hawks want him to be treated like an All-Star, they want a big-time return for Collins—not quite like the Rudy Gobert or Donovan Mitchell trades, but something in that neighborhood. And everyone else looks at him like he’s a guy who is owed $100 million over the next four years and is having the worst year of his career. The Nets can build a package around Joe Harris to make the money match, and add in Royce O’Neale and Cam Thomas.
3 weeks ago – via Thomas Darro @ Heavy.com

Alex Schiffer: Nets say Joe Harris is available tonight while Markieff Morris is questionable against the Spurs with a non-Covid illness.
4 weeks ago – via Twitter Alex__Schiffer