Quentin Richardson on his time with the Suns: As far as success and winning, that’s the farthest I’ve made it and the closest I got to winning a championship in my career. That team was super fun. We had Steve Nash, Amar’e Stoudemire, Shawn Marion, Joe Johnson. We basically came out of nowhere. They had us picked to finish last in the division that season, and we came in and took everything by storm. We all always say that we felt like that version, the 2004-05 version of the Suns, if we had a chance to run it back for two or three years, we absolutely feel we would’ve gotten a championship out of that. We had one year, and they traded me to New York, and Joe went to the Hawks. After that, it was never the same version.
9 months ago – via Michael Scotto @ HoopsHype

JD Shaw: Sources: Team USA has received commitments from several players for the next round of World Cup Qualifiers, including Joe Johnson, Juwan Morgan, Langston Galloway and DaQuan Jeffries. Full roster to be released next week.
10 months ago – via Twitter JShawNBA

Jorge Sierra: LaMarcus Aldridge has just passed Joe Johnson for No. 45 all-time in the scoring list. Will soon pass Mitch Richmond too.
11 months ago – via Twitter hoopshype 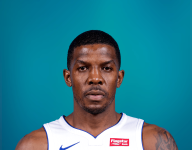 Jayson Tatum on Joe Johnson: We would have loved to keep him around

Jared Weiss: Tatum on Joe Johnson: “We all enjoyed the time that he was here…The ultimate professional and somebody a lot of us look up to and obviously, we would have loved to keep him around. I’m certain it was less about him and more about business.” Still watches Cs games and texts JT.
11 months ago – via Twitter JaredWeissNBA