Position: -
Born: 02/06/89
Height: 6-0 / 1.83
Weight:185 lbs. / 83.9 kg.
Earnings: $9,576,000 ($43,537*)
0 share
share
tweet
pin
sms
send
email
I asked Steph Curry about just that earlier this week. He went seventh overall in 2009, slipping past Minnesota twice as the Timberwolves took Ricky Rubio and Jonny Flynn, an infamous combo mistake. But as the memories of the daily knee-jerk reactions and re-rankings have blurred, Curry only seems to recall two times when the debate over his draft class was at a fever pitch. “Toward the end of my rookie year,” Curry said. “(When) it was just me and Tyreke (Evans) going after that Rookie of the Year.” Then the other? “If I remember correctly, it was mostly when we all started creeping up on our extensions,” Curry said. “Who was going to get the most (money) going into our fourth season? Especially because it was so point-guard-heavy.”
11 months ago – via Anthony Slater @ The Athletic

The Republic reported that the Suns thought they’d worked out a deal for Golden State’s No. 7 pick and players in exchange for Amar’e Stoudemire. When Minnesota surprisingly drafted point guards Ricky Rubio and Johnny Flynn with the fifth and sixth picks, respectively, Curry was there for the taking for the Warriors. Golden State took the scoring machine out of Davidson with the seventh pick – and nixed the deal with the Suns.
3 years ago – via Arizona Republic 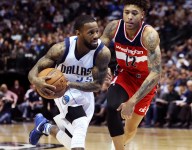 There were three factors weighing on Thomas’ tenure in Cleveland above all else: his health, his contract situation and the Cavs’ championship-or-bust credo. Any one of those three challenges would be a load to handle alone. Their combined impact suffocated Thomas and created an insurmountable atmosphere, which is saying something for a man who has made a career out of beating the odds. And there was a fourth factor that poisoned the pool for Thomas in Cleveland before he even dipped his toes into the water: James was against the trade that sent Kyrie Irving to the Boston Celtics to bring Thomas there in the first place. As he showed last year, James had respect for Thomas and his battle back from a hip injury. But James was skeptical from the start. The injury itself was worrisome. James’ agent also represented Jonny Flynn, a small guard who had his promising career derailed by hip injuries.
4 years ago – via ESPN

David Kahn: Jeff Austin, who I’d known casually, had represented Dell Curry when he was a player. He had been handed Steph due to his connection to Dell and told me this was a family request. “I really need your help on this,” Jeff said, explaining why there would be no visit and perhaps even hell-to-pay. (As it turned out, this was the only time when I was with the Wolves that I ever ran into this type of draft problem.) The back-channel message would have weighed heavily in my decision-making process under any circumstances, but especially in Minnesota. Immediately after my hire, I was spending nearly every weekday morning in the team’s conference room, listening to team business partners and season-ticket holders lament over coffee and pastries. “You’ll never attract free agents here,” they said, practically in unison. “Players don’t want to play in cold-weather places.” Doomsday all around.
5 years ago – via Sports Illustrated

share
tweet
send
sms
email
David Kahn: So we now had the Nos. 5 and 6 picks in the draft. Taking not one, but two players who might not want to play in Minnesota? That would have taken real cojones. We took Rubio and Jonny Flynn, a ready-to-play point guard who started 81 games for us as a rookie and then fell victim to a terrible hip injury. At the time, drafting Flynn made a lot of sense: we didn’t have a single point guard on the roster and our staff had ranked him No. 1 among all point-guard prospects for not only his on-court play, but also his strong leadership qualities, a significant team need.
5 years ago – via Sports Illustrated

share
tweet
send
sms
email
David Kahn: Flynn made his final move to the top of our charts based on his impressive visit and workout with Tyreke Evans and Brandon Jennings, among others. Curry’s absence was duly noted. Rubio wasn’t there, either, but I thought his passing ability and defense were extraordinary for an 18-year-old and was willing to take the risk I could ultimately recruit him to come. That was the player I wanted. There are only two reasons to share this story now. First, Dell Curry revealed the family’s demand to Minnesota last year but didn’t provide any detail. Part of the story’s out.
5 years ago – via Sports Illustrated