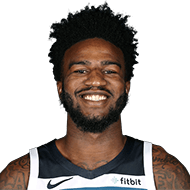 During the 2018-19 season, then-Warriors big Jordan Bell was suspended a game for “conduct detrimental to the team” after he purchased two items at Golden State’s team hotel in Memphis and charged them to assistant coach Mike Brown’s room. Bogut recalled to KNBR’s “Tolbert, Krueger & Brooks” that occurred shortly after he re-joined the Warriors as a free agent, claiming that Bell’s purchase was a lot more innocent than many social-media users assumed. “This hotel had a rule where if you didn’t have a credit card on file, you had to pay for it on the spot,” Bogut explained (h/t KNBR’s Jake Montero). So Jordan Bell goes into the gift shop. I don’t know what the hell he bought, some candles, some peanuts, just a bunch of random s–t, right? Decides ‘I’m going to sign this off to Mike Brown.’ He gets signed off, and as soon as he leaves, they call Mike Brown’s room, like, literally five minutes later like, ‘Sir you need to come back down because we don’t have a credit card on file, you need to pay for that.’ He’s like ‘I have no idea what you’re talking about, I’ve been in my room for the last hour.’
2 weeks ago – via Marcus White @ NBC Sports

share
tweet
send
sms
email
So they get the CCTV footage, and you see Jordan Bell walking in there. And Jordan Bell’s like ‘Nah, it wasn’t me,’ and they’re like ‘We have you on camera’ and he’s like ‘Oh yeah it was, but I was just playing a prank.’ “They take it seriously, right. Then he throws [Klay Thompson] under the bus, ‘Yeah this is a prank that a bunch of us do, like Klay was always doing it to me, always signing his internet and his inter-room movies to my rooms. So I just thought it was a thing we did on the team.’ Then Klay’s sitting there like ‘Dude, what the f— man, I have nothing to do with this.’
2 weeks ago – via Marcus White @ NBC Sports

Fred Katz: The Wizards have released Jordan Bell from his 10-day contract, sources tell @The Athletic.
1 month ago – via Twitter FredKatz

The Washington Wizards announced today that they have signed free agent centers Alex Len and Jordan Bell. Len (7-0, 250) has averaged 7.9 points and 6.2 rebounds per game while shooting .512 from the field in 474 career games (185 starts) over eight seasons with Phoenix, Atlanta, Sacramento, and Toronto. He appeared in seven games this season for the Raptors.
1 month ago – via NBA.com

This rumor is part of a storyline: 20 more rumors
share
tweet
send
sms
email
Fred Katz: Look for up to five players to potentially be in the G League bubble for the Wizards: The three exhibit 10 guys they had in training camp (Yoeli Childs, Caleb Homesley & Marlon Taylor), Jordan Bell and maybe two-wayer Cassius Winston, depending on what they choose to do w/ him
2 months ago – via Twitter FredKatz

Fred Katz: The Wizards have cut Jordan Bell, who they signed earlier today, according to a source. Look for Bell to play for the Wizards’ G League team in the bubble.
2 months ago – via Twitter FredKatz