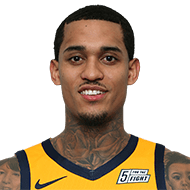 Eric Walden: Quin Snyder, on the off-court vibe brought by Jordan Clarkson: “The word that comes to mind is authenticity. … He’s one of those people that, when he walks in the door, your day gets better. He’s got a magnetic personality.”
3 months ago – via Twitter tribjazz

Jordan Clarkson saw the hateful racial slur spray-painted all over a well-known Filipino food truck in Utah on social media and was overcome with raw emotion. “F— C—-s” and an offensive image of a face with slanted eyes was sprayed on the side of the World Famous Yum Yum Food Truck last weekend, and it didn’t take long for the images to reach Clarkson’s phone.
3 months ago – via Ohm Youngmisuk @ ESPN

share
tweet
send
sms
email
“If you want me to be real honest, my first reaction was, ‘This is bulls—!'” Clarkson told ESPN on Thursday. “I was just like, we can’t be f—ing doing this. Those were the exact words that came out of my mouth to my boys, my family and everybody that was around me. So they were like, let’s do something [about it].” “There’s just no room for that,” Clarkson added, “especially right now. It’s been tough, tough years on this Earth, this country, this world. There’s a lot of stuff going on. I feel like us together, and everybody finding a peace, will make things a lot more comforting in this world. We ain’t got no room for the hate no more. That’s got to go out of the window real quick.”
3 months ago – via Ohm Youngmisuk @ ESPN

share
tweet
send
sms
email
The 29-year-old Clarkson was one of many, including local politicians and businesses, who wanted to help restore the food truck. Clarkson paid for interior cleaning and detailing and joined with vehicle wrap company Identity Graphx, which designed a new exterior for the truck that will be unveiled Saturday at the Philippine Independence Day celebration in Salt Lake City. Clarkson also offered the owners, Ben and Erin Pierce, with significant financial support to get the truck up and running again. Clarkson said the Jazz invited the truck’s owners and employees to Game 2 against the LA Clippers on Thursday (10 p.m. ET, ESPN).
3 months ago – via Ohm Youngmisuk @ ESPN

share
tweet
send
sms
email
The Utah Jazz’s Vivint Arena was on tilt, the crowd delirious over the home team having erased a 13-point halftime deficit in Game 1 of a Western Conference semifinal. The ball swung twice, ending up in Clarkson’s hands in the right corner, and he unleashed his sixth made 3-pointer with 9 minutes, 1 second to go. It was Jazz 91, Clippers 85, and, well, the noise inside … let’s just say no crowd had ever cheered for Clarkson before, not like that. “After you make it, it’s like it’s so loud that it gets quiet, to be honest with you,” Clarkson said in a sitdown interview with The Athletic. “Yesterday it got to the point where, literally, it was blistering loud in there, where you actually couldn’t hear. You almost feel like everything is silent, it’s so loud. That’s one of the best feelings.”
3 months ago – via Joe Vardon @ The Athletic

A Filipino and Asian fusion food truck in Utah that was vandalized with racist graffiti over the weekend has been redesigned with the help of the local community and NBA star Jordan Clarkson. Yum Yum Food Truck owner Ben Pierce found racist insults covering one side of his food truck in the city of Layton on Sunday, according to WTKR News 3.
3 months ago – via Ryan General @ Yahoo! Sports

share
tweet
send
sms
email
In an update on Yum Yum Food Truck’s Facebook page, the owners posted an image of their completely repainted truck with a message thanking “Utah Jazz’s Jordan Clarkson and Dan from Identity graphics for the new look.”
3 months ago – via Ryan General @ Yahoo! Sports