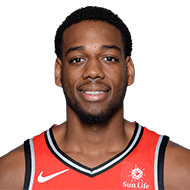 Position: -
Born: 07/27/93
Height: 6-4 / 1.93
Weight:210 lbs. / 95.3 kg.
Earnings: $77,250 ($83,291*)
0 share
share
tweet
pin
sms
send
email
The thought that continues to creep into Jordan Loyd’s mind, nearly two years after his 15 minutes of fame came and went, is “how in the hell did I end up there?” If you know Loyd’s name at all, chances are it’s because you remember him in a dark suit, T-shirt, gold chain and fresh, Air Jordan XII sneakers, spread out and hunched over in front of the Toronto Raptors’ bench like he was riding a wave on a surfboard, with his eyes popping out of his head as Kawhi Leonard crouched before him, waiting to see if Leonard’s shot at the end of Game 7 of the 2019 Eastern Conference semifinals would stop bouncing on the rim and fall through the hoop.
1 year ago – via Joe Vardon @ The Athletic

share
tweet
send
sms
email
Hell, maybe Loyd’s name escapes you, because ESPN dubbed him the “random guy in a suit” in its highlight package of Leonard’s shot, which of course did ultimately splash the net and sink the 76ers. Loyd even had a shirt made for the Raptors’ championship parade that said, well, “random guy in a suit.” Today, Loyd, 27, is starring for Serbia’s KK Crvena Cvezda (in English, “Red Star”) in the EuroLeague. As of this writing, he is third in the league in scoring 17.0 points per game in 23 contests, and another 14.4 points in 13 games in the regional ABA league. The 6-foot-4 shooting guard is being recruited heavily by some of Europe’s top clubs for next season, and back home, NBA teams are taking notice.
1 year ago – via Joe Vardon @ The Athletic

share
tweet
send
sms
email
Twice in the last year, in two different countries, Loyd has been in quarantine due to COVID-19, including in December and January when he wrestled with fever, chills and a loss of taste and smell in his Belgrade apartment, thousands of miles away from his family home in suburban Atlanta. Also somewhere in the U.S., though Loyd won’t say where, precisely, for fear someone might come looking for it, he has his 2019 NBA championship ring from the Raptors. He was the last member of that title team to see his ring, because he was in Spain until July 2020. At Toronto’s Pearson International Airport, he is featured prominently in a mural of Leonard’s miraculous shot. “People even message it to me on social media, like I haven’t seen it before,” Loyd said. So, how in the hell, exactly, did Loyd’s life take this path, from obscurity to NBA champion to where he is now? It started with a $240,000 buyout from his father.
1 year ago – via Joe Vardon @ The Athletic

share
tweet
send
sms
email
“I was excited because they were going to be a EuroLeague team,” Jordan said. “I think they had just won EuroCup, and I was really anxious to be able to go play EuroLeague basketball because I didn’t think the NBA was a possibility. “Sure enough, right as I get off the plane from Summer League, (his then-agent) calls me like, ‘Hey, Toronto wants to offer you a two-way contract.’ I’m like, ‘What?’ I was completely shocked because I didn’t think I played well enough at all or showed enough to be able to get that call. When I did, the first thing I thought was I was super excited, and then I was like ‘Oh no, first I’ve got to get out of this contract.’”
1 year ago – via Joe Vardon @ The Athletic

share
tweet
send
sms
email
As the ball left Leonard’s hand, Loyd didn’t think he’d make the shot. “I was like, ‘Man he’s not getting this off,’ because Joel Embiid was closing,” Loyd said. “Kawhi’s jump shot is usually pretty narrow. He doesn’t have the highest-arching jump shot. So that’s what I’m thinking, I’m going to this dead corner and I just hope he gets it off. And then once he shoots it, it’s like super high, I’m like OK, it’s higher than normal. And then I’ve always told people I thought Scotiabank has the hardest rims, basketball rims, ever. You don’t get a lot of bounces in these arenas, and then for that ball to bounce around like I don’t know how many times, and then fall in, was like, come on man. It was insane. I didn’t think it had a chance, and sure enough, I was in so much shock.”
1 year ago – via Joe Vardon @ The Athletic

share
tweet
send
sms
email
It’s a photographer’s dream for the end of an NBA playoff game, one that decides who advances and whose season dies, to come down to a single shot, and have that shot bounce, so deliberately, and hang, so dramatically, on the rim. The expressions were priceless. Leonard in a full crouch, with his tongue out. Embiid with his mouth agape and eyes that said, “No way.” Raptors bench players, like Danny Green, in full-on stare. Fans, waiting to erupt. “All this stuff happening, and then you’ve got Jordan Loyd, just like in the front and center,” Loyd said. “Which I am not big on being, honestly, I prefer to be in the background, but that game was so crazy. I just had to watch the game. I was in a suit, I didn’t have any pressure, I’m just having fun watching the game, and then there we go with this picture, it’s just, it’s all she wrote after that.”
1 year ago – via Joe Vardon @ The Athletic