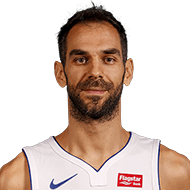 Position: -
Born: 09/28/81
Height: 6-3 / 1.91
Weight:210 lbs. / 95.3 kg.
Earnings: $86,202,087 ($103,340,524*)
0 share
share
tweet
pin
sms
send
email
Toronto Raptors fans have always known José Calderón could put on a show. The former NBA guard was a magician with the ball, dishing out assists like few other guards in Raptors history. But it turns out the basketball court isn’t the only stage Calderón stars on. The 39-year-old starred for the judges on the Spanish version of The Masked Singer, a competition show in which celebrity guests disguise their identity while showing off their singing talents.
11 months ago – via Aaron Rose @ Sports Illustrated

share
tweet
send
sms
email
Calderon dressed up as a dog and performed Enrique Iglesias’ famed song Bailando for the judges. While it might not have been pitch-perfect, it was enough to shock the judges when he later revealed his identity.

The Cavs had just lost to the Golden State Warriors in Game 1 of the 2018 NBA Finals when JR Smith forgot the score and dribbled the shot clock out at the end of regulation. Cleveland’s players were already in the locker room waiting for James when he entered and proceeded to punch one of the white boards with his shooting hand, causing a bone contusion that later required a soft cast. “Yeah we were there but didn’t know it was that serious,” former Cavaliers point guard Jose Calderon told Bleacher Report. “We kept going on with our meeting. There wasn’t a lot of talking after that game. We didn’t know how bad (LeBron’s hand) was in that moment.”
2 years ago – via Greg Swartz @ Bleacher Report

share
tweet
send
sms
email
“There was a lot of tension,” Calderon said. “At that moment, that was our chance. We go to the free-throw line with George Hill, one of the best free-throw shooters ever and he makes the first one. I’m thinking at least we’ve got the tie. With the second one, everything happened so quick. “The miss. The rebound. Everybody’s expecting JR to just go up, but he runs out and the game ends. Going to overtime was difficult. We didn’t really have a chance in overtime to win that game.”
2 years ago – via Greg Swartz @ Bleacher Report

share
tweet
send
sms
email
Jeff Zillgitt: Former NBA player Jose Calderon, who joined the NBPA at the start of the season as a special assistant to NBPA executive director Michele Roberts, is in the bubble and at Celtics-Heat Game 2.
2 years ago – via Twitter JeffZillgitt

share
tweet
send
sms
email
And so began the Jose Calderon Sisyphean Point Guard battle. It’s something I wrote about plenty when I was only writing as a hobby on the side. It was fascinating to me that over the years the Raptors would bring in a number of point guards to supplant Calderon, only for Calderon to continually prove the better starting option. It began, somewhat, with James, more on aesthetic term and age than performance. Calderon then transitioned into a He Should Play More All-Star in the Forderon years, then fought off Jarrett Jack and Jerryd Bayless. To this day, the first Rudy Gay trade remains nearly as important to the success of this Raptors’ era as the second, because who’s to say even Kyle Lowry could have beaten out Calderon for a starring role? (I am. Lowry is. It would have been the end of the Calderon victory cycle. But Calderon started at least part-time in Detroit, Dallas, New York, Los Angeles, Atlanta and Cleveland after leaving.)
2 years ago – via Blake Murphy @ The Athletic

share
tweet
send
sms
email
I found something remarkably admirable in Calderon’s ability to oscillate between roles and quietly continue to outperform expectations and glossier options, all while profiling as a beloved teammate and franchise figure. That longevity had him atop the Raptors’ all-time leaderboard for assists until recently, and he remains one of the more decorated long-time Raptors from a statistical perspective. He also, of course, added the 3 to his game to become a lethal (if too unselfish) multi-level shooting threat, leading the league in 3-point percentage in 2012-13 and free-throw percentage in 2008-09.
2 years ago – via Blake Murphy @ The Athletic