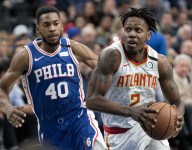 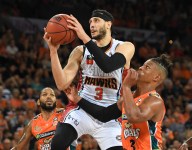 Josh Boone, former Nets first-round pick, and Illawarra Hawks teammate of Ball last season: “His court vision is phenomenal. For only being 18 years old, he sees more of the court than virtually any other male 18-year-old I’ve ever seen. The thing that I just saw the most was his upside is just insane. I’ve been doing this for a very long time. I think he probably has the greatest upside to any player that I’ve ever played with in terms of how good he is now versus how good he could potentially be. His ceiling is just almost limitless.”
2 years ago – via Michael Scotto @ HoopsHype

share
tweet
send
sms
email
Melbourne United has signed former New Jersey Nets big-man, Josh Boone, sources told foxsports.com.au. Boone will join United as a temporary injury replacement, but is expected to be with the team for the remainder of the 2016-17 season, sources said. After David Andersen and Devin Williams both suffered long-term injuries, United immediately began searching for a player to bolster its frontcourt, with the team choosing to go with the 32-year-old Boone.
6 years ago – via Perth Now