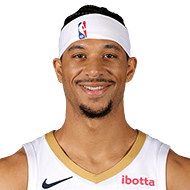 Hart has had nine regular AirPods, two AirPod Max headphones, five AirPod Pros (at least one new pair since June), six Beats Studios, three Powerbeats Pro by Beats and one just labeled “New Airpods.” “Whatever AirPod that is,” Hart said. Hart revealed he now travels with two extra sets of AirPods — one Max and one Pro — just in case he loses one. It almost happened Wednesday night in Charlotte, North Carolina. “I actually lost my case yesterday,” Hart said. “Luckily, our security dude found it.” What happened? “I don’t know,” Hart said. “I just got on the plane and I’m like, ‘F—, I lost it.'”
6 days ago – via Andrew Lopez @ ESPN

share
tweet
send
sms
email
With new technology though, Hart hopes there aren’t as many instances of lost AirPods moving forward. “This was before they had Find My iPhone and Find My AirPods and all that,” Hart said. “Now that they got that, I’m sure it’ll probably be a little better.”
6 days ago – via Andrew Lopez @ ESPN

The first we know of: I’m told that some prominent NBA players will be sporting U.S. men’s national team shirts this weekend on their catwalk entrances to various arenas to help hype up the Americans’ forthcoming World Cup campaign before the lads’ first Group B game Monday against Wales. Chicago’s Alex Caruso, Portland’s Josh Hart, Milwaukee’s Jrue Holiday, New Orleans’ Larry Nance Jr., San Antonio’s Josh Richardson and Orlando’s Jalen Suggs are among the players expected to participate. And word is there should be several more to emerge after arranging to receive #USMNT gear from U.S. Soccer.
2 weeks ago – via Marc Stein @ marcstein.substack.com

Aaron J. Fentress: Some promising news regarding Damian Lillard’s status for Monday at Miami has emerged. Not so much for Simons. Lillard (calf) – Questionable. Hart (Ankle) and Winslow (Ankle) are Probable. Simons (Foot Inflammation) – Doubtful Payton II and Sarr (Wrist Sprain) are Out.
3 weeks ago – via Twitter AaronJFentress