David ‘Dubi’ Pick: Euroleague guard Justin Dentmon has cut ties with Galatasaray and returns to US tomorrow, according to source.
5 years ago – via Twitter IAmDPick 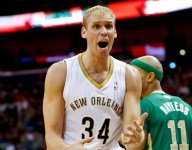 These are the oldest players in summer league this year

share
tweet
send
sms
email
“Some guys make it but not all get a shot,” Dentmon said. “I was just hoping for one legit chance. I got called up to the Raptors, but they didn’t like me. Coach (Dwane Casey) didn’t like me and I never understood that. I never got a shot to play with the Spurs or the Mavericks either. Honestly, I really thought I’d stick with Toronto for the rest of the season. “After a strong season in the Development League and a few call ups, I opted to stick around the NBA and rejected overseas interest. Then I got hurt, pulled my hamstring and the Austin Toros turned their back on me. I asked for a trade and went to play for the Texas Legends. That didn’t work out either and that’s when I looked at Europe.”
7 years ago – via Basketball Insiders

share
tweet
send
sms
email
Overseas teams annually explore the D-League market for talent, however, a large portion of clubs can’t afford its costly buyouts. “The NBA and the things teams tell players are exactly what young guys want to hear,” Dentmon said. “Truth is, it’s all politics. Every player owns the right to play at least once in the D-League, but my best advise would be: DON’T. Don’t spend your entire career chasing the NBA. Even though teams say one thing — and might even call your number up to the NBA — they already know who they want on the floor and have their eyes fixed on the up-and-coming draft prospects.”
7 years ago – via Basketball Insiders

share
tweet
send
sms
email
Zalgiris guard Justin Dentmon admits that he would rather stay and play for the Lithuanian champions than go into the NBA. The Euroleague MVP for week five of the regular season wishes to remain loyal to the club he signed for at the start of the season. He was speaking to a Zalgiris TV show, when he was asked a hypothetical about staying in Kaunas or going to the NBA, if a GM would call you? “I have an agreement with the GM here. I’m going to finish what I started. I want to be known as a loyal person,” Dentmon said. “It ain’t all about the money. It’s about being remembered for the player you are and laying your legacy. That’s what I want to be.” Dentmon has frequently been linked with moves away from Zalgiris, with Germany being high on the list.
8 years ago – via TalkBasket