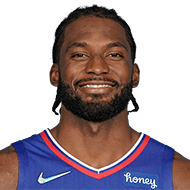 Law Murray: Justise Winslow became a father a week ago today, returned yesterday after personal leave. He joins Morris and Coffey as players who will fill in for Batum’s absence And at center, Ibaka’s full return gives Clippers three competent options (Zubac, Hartenstein) when LA stays big
2 weeks ago – via Twitter LawMurrayTheNU

Law Murray: In addition to Mann, Justise Winslow is still not with the team, per Lue. That means that you all will get what you want: some rotation minutes for Brandon Boston Jr., Amir Coffey, Jay Scrubb.
3 weeks ago – via Twitter LawMurrayTheNU

Mirjam Swanson: Taylor Jenkins on his impressions of Justise Winslow: “Our time with him was great. Obviously there were some challenging moments for him … he just had a positive attitude through all of that.”
1 month ago – via Twitter MirjamSwanson

When the Clippers signed Winslow, the thought was that he would be an intriguing fit as a small-ball big, but the team also liked his on-ball skills. Since the team started working out more prior to training camp, it became clear Winslow’s ballhandling was showing through. “As far as yesterday, but the whole last week and a half, when guys are playing at the facility, just how he was able to grab the rebounds and push it and attack in transition,” Lue said Wednesday when asked what he noticed from watching Winslow. “That adds a different dynamic to our team and being able to rebound and go. And he’s able to make passes and make plays. Yesterday we played him at the backup point guard a little bit because he did that in Miami, so just trying to move him around. He’ll play some point guard, he’ll play some five, he’s gonna do a lot. But his movement, the way he would defend and guard the basketball, he showed us a lot in this last week and a half, two weeks.”
2 months ago – via Law Murray @ The Athletic

share
tweet
send
sms
email
“I’m pretty comfortable man,” Winslow said of his fit in small lineups. “My rookie year, I started at the five in Game 5 and 6 against Toronto. I played point guard coming off the bench, I played traditional wings. So just initially, the hardest part is getting used to my teammates more so than getting used to that position. Knowing where they like the ball, who’s cutting, who’s spotting up, knowing tendencies. That’ll be more of the transition more so than playing the four or playing the five. It’s just knowing my guys.”
2 months ago – via Law Murray @ The Athletic