Those in the league with knowledge of the situation expect Toronto’s Nick Nurse, Philadelphia’s Doc Rivers and Utah’s Quin Snyder to be candidates should they become available. Former Portland coach Terry Stotts, former Oklahoma City coach Scott Brooks, former Lakers coach Mike Brown and Utah assistant Alex Jensen also might be considered. Same for Juwan Howard, who interviewed in 2019, although sources told The Times that his intention is to continue coaching Michigan, where two of his sons play.
10 months ago – via Dan Woike, Broderick Turner @ Los Angeles Times 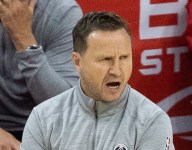 Scott Brooks an option for Lakers?

According to people familiar with Howard’s situation, he wants to continue coaching his two sons, Jett and Jace, who both play at Michigan. Howard interviewed for the Lakers job that eventually went to Vogel in 2019. Howard was an assistant coach for six seasons with Miami and won two championships as a player with James and the Heat.
10 months ago – via Broderick Turner @ Los Angeles Times

Storyline: Lakers Coaching Job
share
tweet
send
sms
email
The most intriguing coaching names they likely will consider are Utah’s Quin Snyder, Toronto’s Nick Nurse, Philadelphia’s Doc Rivers and Michigan’s Juwan Howard, but all of those coaches are under contract. Steve Clifford, the former coach with the Orlando Magic, Terry Stotts, the former Portland Trail Blazers coach, and Darvin Ham, an assistant coach with the Milwaukee Bucks, are names that have been mentioned among league insiders.
10 months ago – via Broderick Turner @ Los Angeles Times 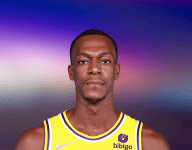 Rajon Rondo to team up with Juwan Howard on Lakers' coaching staff?

Steve Bulpett: Juwan Howard’s name has been floated as a candidate for the Lakers’ coaching job when, as is expected, Frank Vogel is let go. But an L.A. source tells http://Heavy.com that Rajon Rondo could be coming in as an assistant coach should Howard somehow get pried from Michigan.
10 months ago – via Twitter SteveBHoop

Juwan Howard and the Michigan men’s basketball team lost by double-digits to Wisconsin on Sunday and then moments after the final whistle the Wolverines’ head coach lost his cool and slapped a Badgers’ assistant coach in the head. This all happened in the handshake line after Wisconsin’s 77-63 victory at home. The Badgers called a time out in the final minute and that apparently didn’t sit well with Howard, who was clearly upset after the game and didn’t want to shake hands with Wisconsin head coach Greg Gard.
12 months ago – via Andy Nesbitt @ For The Win