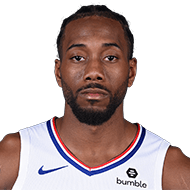 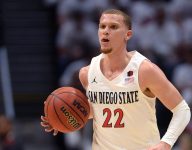 Malachi Flynn: 'I know how to make the right play and I can really shoot it'

Kawhi Leonard has arrived in the equity deal space. The Los Angeles Clippers superstar has agreed to an equity stake agreement with energy drink maker X2 Performance. The terms of Leonard’s equity stake were not made available, but company CEO Mark French told CNBC that Leonard is a “significant shareholder.” The deal also gives Leonard two seats on the company’s board of directors. X2 dedicated part of its website to the 2019 NBA Finals MVP and will use his image and likeness to expand.
2 weeks ago – via Jabari Young @ CNBC

HoopsHype: You can only pick one: Down 1 with 2.6 on the clock. Who’s taking the last shot? Kevin Durant, LeBron James or Kawhi Leonard? Nikola Mirotic: KD.
2 weeks ago – via Twitter NikolaMirotic33

What’s more is that Clippers’ star Kawhi Leonard has reportedly reached out to Paul and is recruiting him to join his former team. Via the Ryen Russillo podcast, h/t @LAClippersFilm: “The Clippers definitely interested in Chris Paul,” says Russillo. “The math doesn’t really make any sense and Paul has basically told any of the teams that are interested in trading for him, ‘hey, I don’t want you trading your player for me. I want to just come and join you,’ but that’s really hard when you’re making over $40 million a year and another year for $40 million plus for next year. So Paul’s not taking any kind of buyout for Oklahoma City to then try and make up the money somewhere else because I don’t know that the buyout would make a ton of sense for anybody involved, even if the buyout were really high and then Paul went ahead and made extra money.
3 weeks ago – via Clutch Points

This rumor is part of a storyline: 1 more rumor
share
tweet
send
sms
email
“Here’s something that did surprise me because it just feels like Kawhi is this distant, mythological creature that doesn’t talk with anybody. Apparently, Kawhi reached out to Chris Paul immediately and was like, ‘hey, you should come here.’ So that part is real, the pursuit is real, the interest and the math on it from Paul’s standpoint doesn’t seem to be all that realistic.”
3 weeks ago – via Clutch Points

Kawhi Leonard is extending an olive branch to Snoop Dogg in the form of some free swag. The LA Clippers star Leonard sent the famous rapper several pairs of New Balance shoes this week. Snoop is a big supporter of the Los Angeles Lakers and clowned Clipper fans Marcellus Wiley and “Clipper Darrell” over the gift from Leonard. Here is the video (but beware of the foul language):
4 weeks ago – via Instagram