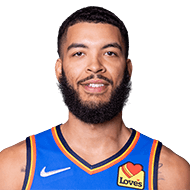 Yossi Gozlan: OKC has 16 players. Three of them are non-guaranteed. I think we can lock in Kenrich Williams to make the roster. He’s a good rotation player on a great contract and will probably be a strongtrade candidate among other competitive teams. That leaves among the non-guaranteed guys Gabriel Deck and Charlie Brown Jr. for the last roster spot. I think I saw some reports that Deck might be headed back to Europe, but I’m not sure how true that is. If he’s headed overseas, then he’s the logical candidate. Otherwise, Brown seems like the guy to go. OKC is still roughly $22 million below the salary floor, so they are definitely going to add some more players via salary dumps to get a little closer.
3 months ago – via Michael Scotto @ HoopsHype

Storyline: Training Camp Cuts
share
tweet
send
sms
email
Brandon Rahbar: Ty Jerome on Daigneault saying Kenrich was the most respected guy in the locker room. “Hands down. Definitely true. He’s become one of the guys we look to. If it was up to him, he’d play 48 minutes a game.” OKC had suitors for Kenny Hustle at the trade deadline but said NOPE.
7 months ago – via Twitter BrandonRahbar

Joe Mussatto: Gabriel Deck will play tonight, Mark Daigneault said. So will Charlie Brown Jr. Daigneault was transparent in saying Deck and Brown will take the minutes of Kenrich Williams tonight. Williams was told of the plan.
7 months ago – via Twitter joe_mussatto

Joe Mussatto: Kenrich Williams (left ankle sprain) will not return, per the Thunder.
8 months ago – via Twitter joe_mussatto