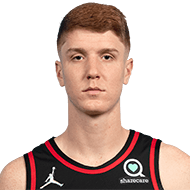 Jason Anderson: Kings guard Kevin Huerter rolled an ankle in the third quarter against the Clippers and had it wrapped after the game. He said he thinks he’ll be good to go tomorrow vs. the Bulls.
21 hours ago – via Twitter JandersonSacBee

share
tweet
send
sms
email
“Kevin Huerter, right now, he’s playing like Klay [Thompson], Steph [Curry],” Durant said on a recent episode of “The ETCs” to Boardroom’s Eddie Gonzalez. “The way he’s coming off the hand-off and shooting the basketball right now … if you’re not a basketball fan and locked in on the league, you’ve got to watch how Kevin Huerter is shooting this ball right now.”
2 weeks ago – via Tom Dierberger @ NBC Sports

"Kevin Heurter, right now, he's playing like Klay, Steph. If you're not a basketball fan and locked in on the league, you gotta watch how Kevin Heurter is shooting this ball right now."@KDTrey5 sees what they're doing in Sacramento. 👀 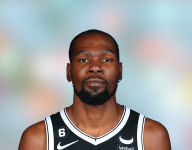 Legion Hoops: Kevin Durant on Kevin Huerter: “He’s playing like Klay, Steph. If you’re not a basketball fan and locked in on the league, you gotta watch how Kevin Huerter is shooting the ball right now.”
2 weeks ago – via Twitter

The Kings’ starting five (Fox, Kevin Huerter, Harrison Barnes, Keegan Murray and Domantas Sabonis) is blitzing opponents by an amazing 21.8 points per 100 possessions. Units in which Malik Monk replaces rookie Murray with that group are scoring a ridiculous 142.8 points per 100. Four of the five starters have true-shooting marks above 60 percent, and sixth man Monk is at 59.7. In the middle, Sabonis has been the same highly effective pick-and-roll partner and high-post fulcrum he was in Indiana; while he won’t protect the rim, he’s at least contributed to the one thing Sacramento does well defensively by rebounding 31.8 percent of opponent misses. (The Kings are second in defensive rebound rate; their problem is inducing a miss.) We won’t belabor what Tyrese Haliburton is doing in Indiana, but fit-wise, the Fox-Sabonis tandem is working. With so much shooting around them, Sacramento is shooting a league-best 59.8 percent on 2s.
2 weeks ago – via John Hollinger @ The Athletic