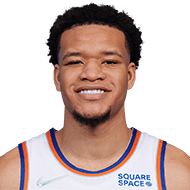 “I had my fair opportunity; didn’t make the best of it, unfortunately,” he said.  Friday night, he was back at the Garden to face the Knicks for the first time, now playing for the Pistons and eager to make his mark against the team that drafted and traded him. Knox ultimately made little impact in 11 minutes, scoring two points on 1 of 6 from the field as the Knicks won 130-106.  “Every game is a chip [on my shoulder], but this one is circled on my calendar, for sure,” Knox said. “This is my old team. Lot of my guys over there, but in between the lines, it’s a different story.”
1 month ago – via Zach Braziller @ New York Post

share
tweet
send
sms
email
“It is what it is. Gotta move on, gotta play harder, learn from it,” he said. “Learned a lot playing under Thibs, playing here in New York. I have to take it to my next chapter.”  Knox, signed to a two-year, $6 million deal by Detroit in the offseason, is looking forward, not back. He’s happy to be a Piston, excited for a chance with a new franchise that is rebuilding and giving extended looks to young players. In his first game on Wednesday, Knox didn’t shoot well coming off the bench, going 1-for-8 with three points and three rebounds in 13 minutes. But he is still working his way back from a calf injury.  “Kevin needs an opportunity, and this is an opportunity for him to get playing time,” Pistons coach Dwane Casey said. “We’re excited to have him.”
1 month ago – via Zach Braziller @ New York Post 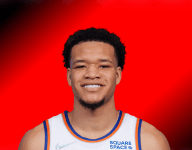