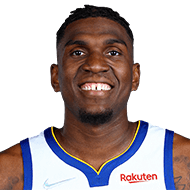 Kerith Burke: Looney said the moment he’ll remember from this game is Klay’s dunk. “When he had perfect knees and Achilles, he didn’t dunk like that,” Looney laughed. Said it shows Klay’s confidence in his body.
2 weeks ago – via Twitter KerithBurke

Some of the usual suspects are anchoring Golden State’s defensive effort. Draymond Green has held opponents to a field goal percentage 4 points lower than their usual averages, one of the best rates in the league, and though Andre Iguodala has been battling injuries, he has an outstanding +7.1 defensive RAPTOR in his return to the Bay Area after two seasons away. Warrior mainstay Kevon Looney continues to be one of the most underappreciated defensive big men in the game, putting up a better-than-average RAPTOR at that end for the sixth consecutive season. But Golden State’s newcomers are also playing a huge role. Bolstered by Otto Porter Jr. (+2.9 defensive RAPTOR) and Nemanja Bjelica (+3.1) in the frontcourt, the Warriors’ newcomers3 have combined for a collective +3.2 defensive RAPTOR, which ranks No. 1 among all teams’ new additions this season. (Meanwhile, our preseason forecast had projected both Porter and Bjelica to be below-average defenders.)
2 months ago – via Neil Paine @ FiveThirtyEight

Connor Letourneau: Kevon Looney: “Klay looked good, especially for someone who’s been out that long. … We’re excited to see him get back.”
2 months ago – via Twitter Con_Chron

share
tweet
send
sms
email
Golden State has James Wiseman and Kevon Looney as true big men, but like last season, they can simply utilize Draymond Green and Juan Toscano-Anderson at the five for their small ball. “I think the league has changed quite a bit,” Steve Kerr told Tim Kawakami on the TK Show podcast, via NBC Sports. “I know if you look at our team historically over the last six, seven years, we’ve always carried a lot of centers. But think about the last part of last season, we played Draymond at five so much, we even played Juan at five. The league seems to be getting smaller and quicker every single year. “So I think we’re less inclined to carry a bunch of centers like we used to. But really, if we had somebody in there who was playing well at that position and thought they could help us win, then we would keep that guy. It’s really still a matter of using training camp to figure out what makes the most sense for us.”
4 months ago – via Angelo Guinhawa @ Clutch Points

Adrian Wojnarowski: Kevon Looney is exercising his $5.1M option to return to the Golden State Warriors next season, sources tell ESPN.
7 months ago – via Twitter wojespn