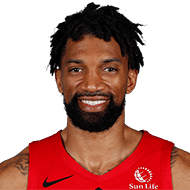 And if you’re looking for even MORE reason to be frustrated, Dave McMenamin of ESPN provided some more ammo recently. In his weekly podcast discussing the Lakers and Clippers with Ohm Youngmisuk, also of ESPN, McMenamin detailed a trade the Lakers didn’t do involving THT last season before pulling the trigger on the PatBev one (h/t OVOLakeShow/Twitter). “I’m told that the Lakers had talks with the Toronto Raptors where the Raptors late last year when it already looked like the Lakers were probably out of it or, at the very least, going to be a low seed and wouldn’t have a likely championship path to go all the way, the Raptors would have traded for Talen Horton-Tucker. Traded a first-round pick.”
2 weeks ago – via Jacob Rude @ Silverscreenandroll.com

share
tweet
send
sms
email
Dave McMenamin: “So, think about that, the Lakers had another first-round pick on top of the two firsts right now to play with to try to make this team better… Now, of course, I’m told the trade would have also involved Khem Birch so they would have taken some money there and maybe Birch wouldn’t be the best rotation guy for this group but that first round pick is so valuable and it’s why they’re so hamstrung with what they can pursue right now.”
2 weeks ago – via Jacob Rude @ Silverscreenandroll.com

Michael Grange: Per Raptors: Fred VanVleet is out (due to non-COVID illness); Khem Birch (knee) is questionable.
3 weeks ago – via Twitter michaelgrange

Josh Lewenberg: The Raptors have already ruled Fred VanVleet OUT for tomorrow’s game in Detroit due to his illness. They’ll be without FVV, Siakam and Achiuwa vs the Pistons. Khem Birch is questionable.
3 weeks ago – via Twitter JLew1050