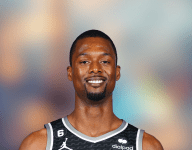 The Suns have a handful of first-rounders to move, but given the team’s impending ownership change, it’s also uncertain how many future assets the current regime can move. In addition, the Suns expressed interest in forwards such as Sacramento’s Harrison Barnes, Washington’s Kyle Kuzma and Houston’s KJ Martin, league sources have said. The Suns engaged in rookie extension negotiations with Cam Johnson prior to the regular season, with a final offer of four years in the range of $66 million, sources say. Phoenix refused to move higher toward the figure Johnson had desired. He is currently sidelined after undergoing surgery to remove part of his right meniscus.
2 weeks ago – via Shams Charania @ The Athletic

Mark Berman: Rockets forward KJ Martin (@KJ Martin) hosted a Thanksgiving event tonight for fifty young boys from the Urban Enrichment Institute. Martin and members of the Rockets staff distributed gifts to the children and provided Thanksgiving groceries for their families.
2 weeks ago – via Twitter MarkBermanFox26 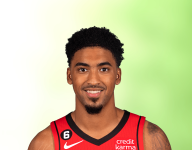 KJ Martin open to a contract extension with Rockets

Following the draft, when Houston had Jabari Smith Jr. and Eason, K.J. Martin’s position in the rotation looked even murkier. But the Rockets made it clear Martin was in their plans. Teams had called Houston in hopes of acquiring the athletic wing but the organization refused to budge. He had to buckle down and prove himself once again in training camp and preseason. With some stability under his belt, scoring a career-high 11.3 points per game, Martin is now open to an extension to remain in Houston long-term, sources with knowledge of discussions tell The Athletic.
3 weeks ago – via Kelly Iko @ The Athletic

share
tweet
send
sms
email
“I don’t care about how much I score,” Martin told The Athletic. “If I can get someone else open, I’m fine with that. Just me being a connector — when the offense gets stagnant, get something moving so other guys see it. And the next time we come down the floor, if this works go back to it. Me and Coach talked a lot (about it), and me being a connector on offense and defense helps us a lot.”
3 weeks ago – via Kelly Iko @ The Athletic

share
tweet
send
sms
email
“We have a lot of young guys, so off misses, even some makes, getting the ball out fast and pushing it in transition,” Martin said. “Once we see we don’t have a driving angle, getting into our sets and slowing down. The change of pace in the game, that’s where we can be good at. We have guys that can score one-on-one and those guys can also run in transition. That makes us lethal.”
3 weeks ago – via Kelly Iko @ The Athletic