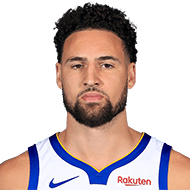 “Klay loves playing with Steph, he respects him so much,” Klay’s father Mychal Thompson said on Dell and Sonya Curry’s podcast “Raising Fame.” “He talks about him all the time and how hard he works, how dedicated he is to the game and to his family. He has said it to me in private that he loves playing with Steph and he wants to retire as a Warrior after another 10 years.“
7 days ago – via Josh Schrock @ NBC Sports

share
tweet
send
sms
email
“He wants to go into the Hall of Fame along with Steph. That’s how close he feels to him and how honored he is to play with him. They have formed a special bond. That’s why I told him, I said,’Even though you’re going to probably miss this year, you and Steph will still have eight years together as long as you take care of your bodies.'”
7 days ago – via Josh Schrock @ NBC Sports

Drew Shiller: Mychal Thompson on Klay’s high school recruitment: “He was very skinny. He made Reggie Miller look like Karl Malone. That’s how skinny Klay was in high school … so a lot of the Pac-12 schools didn’t really take him seriously.”
1 week ago – via Twitter DrewShiller

He was quite visible on the bench at most home games, but in the Warriors’ day-to-day activities, Klay was a lot less present than Curry has been. Obviously, Klay had his ACL rehab and the frustration of knowing that he couldn’t play this season. And maybe that leads to a very energetic Klay Thompson season in 2020-21. “It’s been a really, really hard season for Klay,” Kerr said. “He loves to play basketball so much and just not being able to play has crushed him. And so he was, unlike Steph, over the last couple, few months, he hasn’t been around as often as Steph was. I was OK with that just because it was so frustrating for Klay just to be at practice watching and not really being able to do anything.
1 week ago – via Tim Kawakami @ The Athletic

Storyline: Klay Thompson Injury
share
tweet
send
sms
email
“Finally over the last few weeks he was able to start shooting with our guys, running through some drills and he was so happy to be out there. But for much of the season, it was just about getting away and not torturing himself by watching us play. He’s going to be so ready to play next year and so excited and the rehab is coming along really well, so I have no doubt that assuming everything starts in September and October like it usually does that Klay and Steph will be in great shape and ready to roll.”
1 week ago – via Tim Kawakami @ The Athletic

That means a young player like Eric Paschall, stationary in a San Francisco apartment, can’t come in to begin the early stages of a planned summer reconstruction of his jumper. It means Klay Thompson must shift his ACL rehab away from the facility with which he’s most comfortable. “Yes, it’s hard,” Myers said of Thompson’s rehab. “Privately, by himself. Maybe with one of our trainers individually at his house. Even my own hip surgery recovery, anything you can do without interacting with somebody. … If you don’t have your own gym (in your house), there’s not really anywhere to go. Most guys don’t have a basketball gym in their house. They might have a weight room.”
2 weeks ago – via Anthony Slater @ The Athletic