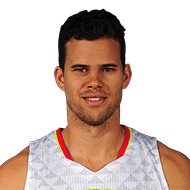 share
tweet
send
sms
email
She said that she once ran into Humphries at the Beverly Hills Hotel, while she was out with her daughter North and pregnant with her son Saint, but things didn’t go well. “I saw him and all of his friends got up from the table, we had the tables next to each other,” she said. “All of his friends got up and said hi to me and he literally just looked at me and like wouldn’t even speak to me.” Earlier in the episode she admitted, “I was so nervous to break up with someone. I handled it totally the wrong way. I fully broke up with him in the worst way and I couldn’t — I just didn’t know how to deal. I learned so much from it.”
2 months ago – via Chelsea Hirsch @ New York Post

Wayzata-based salad chain Crisp & Green has crossed the river, thanks to former professional basketball player Kris Humphries who opened his third franchise in Highland Park this week. This is Humphries’ third of a six-store franchising deal that he signed with the Wayzata-based fast casual eatery a little over a year ago. It marks the first Crisp & Green in St. Paul, and the company’s sixth site overall since it was founded in 2016.
2 years ago – via TCB Mag

Kris Humphries: I’ll be honest, I dealt with a lot of anxiety, especially in crowds. There was about a year where I was in a dark place. I didn’t want to leave my home. You feel like … I don’t know … the whole world hates you, but they don’t even know why. They don’t even know you at all. They just recognize your face, and they’re on you. There were so many times when I was in a gas station just buying a water or something, and the cashier would give me a look, and I could just feel it coming. “Hey, are you … That Guy?” And I’d say, “Ha! Nah, I just look like him.” Or I’d say, “Nah, I’m Blake Griffin. People get us confused.” I didn’t want to be Kris Humphries. It’s the craziest feeling in the world, not wanting to be yourself. And I didn’t even want to say anything to defend myself, because it felt like I couldn’t win. You can’t go up against the tabloids. You can’t go up against that machine. There’s no point. And even if I played that game, I felt like it would be disrespecting the game of basketball.
2 years ago – via The Players' Tribune

share
tweet
send
sms
email
Kris Humphries: I had a pretty good game — something like 15 and 15. Dirk and Jason Kidd were sitting on the trainer’s table, getting a massage or something. Two absolute legends, man. So I’m talking to Dirk, just catching up, and then Jason turns to Dirk and says, “Young fella gave you the business tonight, huh?” I still get goosebumps, to this day. If you ask me why I played the game, it’s for that right there. Whenever I was in the gym, everything else went away. I might not have turned out to be the scorer I thought I was going to be, and I definitely went through some tough times, but at the end of the day, I lasted 13 years in this league. Not a lot of guys can say that. Today, I’m officially retired from the NBA.
2 years ago – via The Players' Tribune