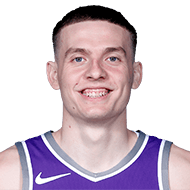 James Ham: Bogdan Bogdanovic and Richaun Holmes are out for tonight’s game. Nemanja Bjelica (right ankle) and Marvin Bagley (left foot) are both questionable. Kyle Guy is with the team and available to play.
1 year ago – via Twitter James_HamNBCS

James Ham: Kyle Guy is back with the team today after playing in Stockton last night. He will be back in Stockton for tonight’s G League game following the Kings game at Golden 1.
1 year ago – via Twitter James_HamNBCS

More than five months after Virginia won its first basketball national championship, the school hosted a celebration Friday night, raising a banner to the rafters of John Paul Jones Arena as thousands of boosters and fans showered the players and coaches that made it happen with cheers and adoration.
2 years ago – via Yahoo! Sports

share
tweet
send
sms
email
Among the players in attendance were De’Andre Hunter, Ty Jerome and Kyle Guy, all of whom left with eligibility remaining for the NBA. Jerome and Guy met with the media before the celebration and agreed that the reality of their accomplishment has still not set in, with Jerome surmising ”I don’t think it ever will.”
2 years ago – via Yahoo! Sports

share
tweet
send
sms
email
Kyle Guy: I am basically unemployed for three more months. So as soon as I got drafted, obviously, we were excited, blah blah blah, and then we started figuring out when I’d go out [to Sacramento]. But then I started realizing, me and my wife, we need some money. We still have to pay for the wedding and our rental car out in Sacramento, Airbnb and all this stuff—that was not easy. Also, she was getting ready to go to law school, so she did some babysitting for some money and then I did Cameo. I’m doing this VIP VR thing, which is kind of like Cameo but it’s a FaceTime for one minute. So they can ask me whatever they want for one minute. I signed up for three sessions of that and then a couple other endorsements like this. You know what Fathead is? The big posters. Yeah. Guy: So there’s something similar to that called Home Stadium, and basically it’s like your whole wall would be a football stadium or a football field or a basketball arena or whatever you want it to be. I’m doing stuff with them. Just anything that can help me get by. Cameo is actually the most steady kind of income that I have, and obviously, most NBA players sign a deal with Panini, which is a trading card company, so I’m getting paid that way as well.
2 years ago – via One37pm

share
tweet
send
sms
email
Were you always this industrious off the court? Guy: I sold a lot of shoes when I was in college. I sold my PlayStation. I sold probably like 50 pairs of shoes. Anything to keep me above water.
2 years ago – via One37pm