share
tweet
send
sms
email
Chris Grant has removed his name from consideration on a job in the front office with the Atlanta Hawks, reports ESPN’s Brian Windhorst. The Hawks were on the market for an experienced executive to join a relatively young front office led by Landry Fields. Grant previously worked for the Hawks and was general manager of the Cleveland Cavaliers.
2 weeks ago – via RealGM

share
tweet
send
sms
email
The Hawks are in serious talks to hire Spurs executive and former Cavaliers GM Chris Grant as a senior adviser in Landry Fields’ front office, sources said. Grant, a well-respected exec, spent nine years in the Hawks’ organization (1996-2005) before serving as an assistant GM and GM for the Cavaliers from 2005 to 2014.
3 weeks ago – via Shams Charania @ The Athletic 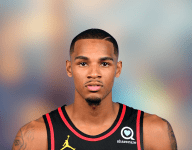 Hawks general manager Fields: There is zero regret about trading for Dejounte Murray

Q: So part of what has been put out there is that there was disagreement as far as the Dejounte Murray trade. I wanted to get your take on what happened there and if that is true, if that kind of sparked the split? Landry Fields: Here’s what absolutely has to be said and understood is that Dejounte Murray is a huge part of what we did. Everything we did to get him, I would do 10 times out of 10 for what we’re trying to build from everything that we’ve talked about, from the vision to the day-in-day process of our development, to how guys interact with one another. Dejounte’s a huge piece of that moving forward. And as far as how that whole process went, to me, it’s simply about when we get to a room, not everyone is always going to agree with things. Like that’s the beauty of it to me. And if we were we’d live in an echo chamber confirmation bias, and all of a sudden, we have group think entering the picture. There’s going to be situations where people disagree on how we should do certain things, or what we should be going after, or what we should be giving up. And that’s all part of the process. But at the end of the day, we got Dejounte Murray, who was an All-Star, who had a fantastic role in San Antonio that we wanted to bring out of that and incorporate more and more into what we’re doing here with the Hawks. Q: So there’s no buyer’s remorse LF: There is zero regret.
3 weeks ago – via Lauren Williams @ Atlanta Journal-Constitution

share
tweet
send
sms
email
Q: And as far as the start of finding some of those players trade deadline is couple of weeks away. How do you guys anticipate using that to kind of kick start finding those complementary players? Landry Fields: Well, we want to get healthy first. We’ve had some bouts with injury, as all teams do. So I’m not making excuses. I’m just saying, you kind of look at the previous question and say, ‘Oh, it’s not working.’ It’s like, ‘okay, not yet.’ And part of the ‘not yet’ is because we need to get healthy. Like we need to see guys, and actually, we haven’t had a great sample size, really judge what is just yet. So as we’re approaching the deadline, you know,we’re not gonna make any rash decisions at all. It’s going to be all about looking at pieces and players that fit for us long term, as we define what it means to be a ‘Hawk’ using that as the filter moving forward. And there’s like, you look out there and not everyone is a ‘Hawk’ people may see a guy that’s available and go ‘well why aren’t the Hawks doing that?’ and it’s like, ‘well, he might not be a Hawks fit.’ And like that’s the process and the filtering that we’re going to do going forward. Because it’s not just about this season, it’s about sustainability moving forward, and you have to have alignment with guys and their values and their skill sets and who they are.
3 weeks ago – via Lauren Williams @ Atlanta Journal-Constitution

share
tweet
send
sms
email
Q: So a lot has happened over the last couple of weeks, with Travis Schlenk stepping down, Kyle’s promotion. Just where do you guys stand with everything? And how excited are you guys to move forward? Landry Fields: Yeah, it’s I mean, with any transition, there’s hard times because it’s just transition and change, for sure. But looking forward, we’re very excited about the future. And Kyle, having him as my right hand man is something that, I think from the first day we had coffee together, I didn’t know him that well, we obviously played against each other. But, early this season before we hired him in his former role, there was something there that I was very intrigued by and was very positive and shared vision, shared alignment on values. So, I knew if there were to be a point where we had a future together, we would work out very well. So extremely excited about that, for sure.
3 weeks ago – via Lauren Williams @ Atlanta Journal-Constitution