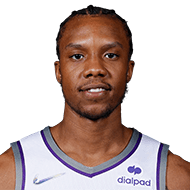 A basketball star from Jersey City stepped up this weekend to help those in need in his hometown for Thanksgiving. Through his foundation, the Sacramento Kings’ Louis King, partnered with Stop & Shop and Hunger Free New Jersey to host a Thanksgiving food and coat giveaway. About 200 families each now have a turkey, all the fixings, and even new coats.
2 weeks ago – via News 12 Connecticut

The 76ers’ Fieldhouse in Wilmington, Del., was the only open gym in town and became a refuge for athletes. Basketball coach and trainer Tony Paris organizes the workouts and has been running summer hoops for Philly and South Jersey’s best for more than 16 years. The who’s who of local pros from the NBA and overseas showed up to the Fieldhouse. It was their only option. Villanova alums Jalen Brunson and Omari Spellman, Philly natives Brad Wanamaker, Amile Jefferson and Rondae Hollis-Jefferson, plus South Jersey players like Jason Thompson and Louis King, just to name a few. Most of the private sessions have about 15-20 players — enough to make up three teams and alternate without too much time on the sidelines.
3 months ago – via Damichael Cole @ The Philadelphia Inquirer

share
tweet
send
sms
email
Louis King was named the MVP of the championship game after putting up 21 points and five steals against Boston. Kyle Kuzma and Brandon Clarke have notably won that award in recent seasons, but King still has a lot of work to do to prove himself in the NBA. He went undrafted in 2019 out of Oregon and has spent the past two seasons in the G League. He signed a two-way deal with the Kings in May, though, and this strong summer showing should only help him prove to Sacramento that he has an NBA future.
4 months ago – via CBSSports.com

Jason Jones: Jackson said Louis King is going to help in Stockton and Sacramento. Said defense is King’s weakest area, but believes King understands that and is improving in that area. Given the current roster, King’s length and scoring ability on the wing could help in the future.
4 months ago – via Twitter mr_jasonjones