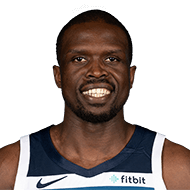 Luol Deng is president of the Republic of South Sudan Basketball Federation and is also on its coaching staff. South Sudan is one win away from qualifying for the 2023 FIBA World Cup, which would be a first for Africa’s youngest country. The Bright Stars need to win just one of three games against other African countries from Feb. 24-Feb. 26, 2023, in Egypt to qualify for the tournament showcasing the world’s top men’s basketball teams. Qualifying for the World Cup could also eventually open the door for the first Olympic berth for war-ravaged South Sudan.
2 months ago – via Andscape

Deng says that South Sudanese basketball fans are very fond of Bol Bol, the son of their beloved late legend Manute Bol. The 7-foot-2 Bol Bol is having a breakthrough season with the Magic, averaging 12.8 points and 7.5 rebounds. “Bol Bol told me he wants to play,” Deng said. “Obviously, this window in February, he’s still in the NBA. So, when we make it to the World Cup, then we can come to Bol Bol and knock on his door again. But in the past, he wanted to play badly. I remember he got hurt, but he wanted to play. But for Bol Bol, for him to [play], he needs to understand that his father’s legacy was for Bol Bol to play. He doesn’t understand how much he’s loved, and I think he will as he gets older. But his dad is loved so much that right now Bol Bol is getting everybody in the country so excited. His games are being watched by every kid.”
2 months ago – via Andscape

share
tweet
send
sms
email
Deng will be in Chicago on Friday where he used to play for the Chicago Bulls to host a private fundraiser for the Luol Deng Foundation. The foundation is a nonprofit organization that “creates pathways to opportunity through sport and development,” according to its website, in Africa, the United States, and the United Kingdom. The foundation also has charitable programs that aid youths in education and sport, people with disabilities, people with mental health problems, poor people and men’s and women’s basketball programs in South Sudan.
2 months ago – via Andscape

share
tweet
send
sms
email
Reflecting on the progress BWB has made in producing NBA-level talent, Ujiri said: “The talent has come a long way. There are many more opportunities now. “You think about the camps – BWB, the FIBA camps, Giants of Africa camps, the SEED [Academy] camps. All these players are doing basketball camps. Al-Farouq Aminu just had one, Pascal Siakam just had one, Luc Mbah a Moute has his, Luol Deng has his. There are so many of them going on [across] the continent… Bismack Biyombo just had his in the Congo, Serge Ibaka – all these guys are coming and giving back.”
5 months ago – via Leonard Solms @ ESPN

share
tweet
send
sms
email
A Luol Deng piece of original artwork has been released as part of the NBA Creator Series in Europe. Created by renowned British artist Reuben Dangoor whose work is heavily influenced by current affairs and his surroundings in London, the piece depicts Luol dunking on a hoop hanging from Nelson’s Column.

With basketball growing in the UK, this artwork from Reuben Dangoor celebrates the impact of Luol Deng's inspirational career 🇬🇧🏀#NBACreatorSeries pic.twitter.com/M2nkCJRLWR

Joakim Noah and Luol Deng will present custom “Bulls Fest Champion” basketballs to winners from each bracket in the inaugural Bulls Fest 3-on-3 tournament. The event is part of a larger Bulls Fest 2022 celebration set for Sept. 3-4 at the United Center. While the event will also feature youth basketball clinics, food vendors, local artists and entertainment, perhaps the signature event will be the 3-on-3 tournament. Divisions range from 8-year-olds up to adults 35 and over and also include a wheelchair and elite bracket.
7 months ago – via NBC Sports Chicago Staff @ NBC Sports

share
tweet
send
sms
email
Los Angeles’ most realistic option may ultimately be stretching Westbrook’s $47 million player option for the 2022-23 season. The Lakers have already shown a willingness to stretch Luol Deng’s contract, which finally slips off Los Angeles’ books this year, although that came under Mitch Kupchak’s stewardship. Stretching Westbrook, according to the strategist, would drop the Lakers to merely $2.5 million above the salary cap, which would allow them to sign a rotation piece to the non-taxpayer mid-level, and another player to the bi-annual exception.
11 months ago – via Jake Fischer @ Bleacher Report