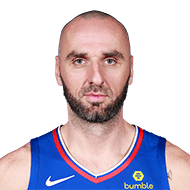 When former Wizards fan-favorite Marcin Gortat used to come up against some of the NBA’s greats during his playing days, certain games turned into recruiting opportunities. Especially his games against the DMV’s own, Kevin Durant. “I tried to talk to KD about, you know, I said, ‘KD I’ll get you my Rolls Royce and I’ll get you my house for a weekend, I need you to sign with the Wizards,'” Gortat told Chris Miller with a chuckle in a special interview airing before Saturday night’s game against the Dallas Mavericks on Wizards Pregame Live.
2 years ago – via Kevin Brown @ NBC Sports

share
tweet
send
sms
email
Durant, on the other hand, would entertain Gortat’s half-joking recruitment attempts whenever the Thunder came to the District. “I was helping. I was helping (general manager) Tommy (Sheppard), I was helping (former general manager) Ernie (Grunfeld). It was the time everyone was talking about KD, obviously later he signed with Golden State, but hey, everybody was trying to get KD. I was like let me help out,” Gortat said. “Obviously it was more of a joke for me, I don’t have any power to convince KD to come to play for Washington, but I was doing my part. I was being me, I was fooling around.”
2 years ago – via Kevin Brown @ NBC Sports

While Gortat would get Durant to bite on his pregame and in-game schtick, the Polish hammer said he witnessed a few instances when Westbrook would go up to his own teammates to tell them to stop laughing no matter what the score was. “I just got to tell you, I love that. That’s a Paul Pierce attitude. He’s a little feisty too,” Gortat said.
2 years ago – via Kevin Brown @ NBC Sports

share
tweet
send
sms
email
Marcin Gortat: Hey @WashWizards #russ got my blessings to wear #4 Face with tears of joySmiling face with sunglasses. Good luck to him and to entire team next year !
2 years ago – via Twitter MGortat

Marcin Gortat: Hey @WashWizards #russ got my blessings to wear #4 . Good luck to him and to entire team next year !
2 years ago – via Twitter MGortat

Is Stan Van Gundy the right hire for the Pelicans?

Marcin Gortat was the starting center for that 2014-15 team and thinks that if Wall was healthy, Washington could have gone all the way to the NBA Finals. “I truly believe if he stayed healthy then we could definitely go to the conference finals. And who knows? Maybe the NBA Finals,” Gortat said to Chris Miller on the Wizards Talk Podcast.
3 years ago – via Mike DePrisco @ NBC Sports