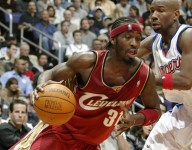 On the eve of the second half of the Turkish Airlines Euroleague Regular Season, Panathinaikos Athens added depth to its backcourt with the addition of point guard Marcus Banks through the end of the campaign.
10 years ago – via TalkBasket

share
tweet
send
sms
email
But promises do exist — Olshey said when he was working for Tellem, they received promises for Shelden Williams, Marcus Banks, Kendrick Perkins, Kedrick Brown and Robert Swift. Sometimes, the promises don’t work out — Swift in 2004 got a promise from Boston at No. 14, but he was chosen by Seattle at No. 12.
10 years ago – via Oregonian