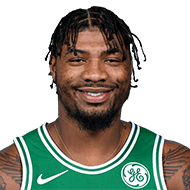 Position: G
Born: 03/06/94
Height: 6-3 / 1.91
Weight:227 lbs. / 103 kg.
Salary: $12,553,571
0 share
share
tweet
pin
sms
send
email
Then there are the other members of the Best Five. Hayward won’t be opting out of his contract unless he has a long-term extension in place, which will be hard for a 30-year-old with a concerning injury history. Indiana is still home for the Haywards, and with Victor Oladipo looking to move on this offseason, according to sources, and Myles Turner possibly in the same boat, there could be an opportunity for Ainge to move Hayward and the abundance of draft picks in his war chest in a mutually agreeable way. Boston won’t have cap space again with three stars locked up long-term, so moving Hayward or Marcus Smart presents one of the few opportunities to get back a player making starter-caliber money.
2 days ago – via Jared Weiss @ The Athletic

Tim Reynolds: Marcus Smart, Bam Adebayo and Jimmy Butler all had 8 rebounds and 8 assists last night. The last time a non-OT playoff game had three players with at least that many reb/ast was a Knicks-Celtics game in 1969. (Only other time in playoffs since? A 2OT Nets-Heat game in 2005.)
4 days ago – via Twitter ByTimReynolds

He discussed what he saw and heard from outside the Celtics’ locker room as he broke news about the fight between Marcus Smart and Jaylen Brown that led to chaos after Game 2 between the Celtics and Heat. Washburn considered it the most chaotic post-game he’d ever seen, with yelling and items throw, eventually spilling out of the room. “Multiple voices, loud, sounded like Brad. It was not just Marcus,” Washburn said. “(Smart) walked out of the room to the bathroom, and that’s when he made his famous statement, ‘y’all on some bullshit’ … yelling continues, for 20+ minutes.”
6 days ago – via Celtics Blog

Storyline: Boston Celtics Turmoil?
share
tweet
send
sms
email
Denver has been significantly better with Murray on the floor than off each season of his career, even accounting for teammates and opponents; according to Ryan Davis’ version of Regularized Adjusted Plus/Minus, Murray has finished 52nd and 61st and 33rd in per possession impact over the last three seasons respectively. Similarly, among players with at least 2500 minutes over the last 3 seasons, he is 59th in Player Impact Plus/Minus with a PIPM (+1.79/100 POSS) sandwiched between Fred VanVleet (+1.93/100) and Marcus Smart (+1.57/100).
7 days ago – via Seth Partnow @ The Athletic

But when the Boston Celtics’ Marcus Smart was at the center of that raucous locker room scene after Game 2 of the Eastern Conference Finals, when the shouting from both Smart and others could be heard all throughout the hallway and we later learned from The Athletic’s Shams Charania that a clash with Jaylen Brown had taken place following their second consecutive loss to Miami, Smart had more on his mind than blown leads and the routine rigors of the bubble experience. As the 26-year-old Smart discussed with The Athletic after practice on Monday, he was already “tipping over” emotionally heading into the game for a very painful and personal reason: The two-year anniversary of his mother’s passing had taken place the day before.
1 week ago – via Sam Amick @ The Athletic

Storyline: Boston Celtics Turmoil?
share
tweet
send
sms
email
I’m coming from the standpoint of understanding, not making excuses. Marcus Smart: Yeah, exactly. And that’s the thing. And it’s tough because only the people who are in that locker room really understand and know what everybody is going through. So like I said, I don’t want to use it as an excuse but it definitely played a role to a certain extent. It’s definitely an emotional day. You’re already on an emotional scale where you’re already tipping over, and then something like (that happens) where you should’ve won for the second time against a really good team that you allowed to come back and steal both games from you. It just pushed it over the edge.
1 week ago – via Sam Amick @ The Athletic

share
tweet
send
sms
email
Marcus Smart: It was just — we were all disappointed. It was just disappointing. We lost two games that we should have won, and nobody was happy. I probably would have felt in trouble with the team as a team — like, we would’ve felt in trouble — if everybody was calm. After a Game 2 loss, up 17, up 14, two games and we lost it. We’re a great team and we’re playing against a great team, so we know we can’t have those types of meltdowns. So yeah, we were all disappointed. And when you’ve got a bunch of brothers who are disappointed, emotions fly and sometimes you’ve got to yell just to get it out and move on. It was one of those nights (laughs).
1 week ago – via Sam Amick @ The Athletic

share
tweet
send
sms
email
Did you wonder (if that would happen) when you went to bed that night, after you guys had those conversations back at the hotel? And who all took part in those talks? Marcus Smart: Yeah, you know we just got together and made sure that we were on the same page. We told each other that we love each other. It was me, Jaylen, Jayson, Kemba, and (coach) Brad Stevens. You know, we just got together and made sure that what happened in the locker room was really in the locker room. It’s unfortunate that it got out, but it happened. Like I said, we’re a family. Families fight. I don’t expect anything less. I expect that if a guy feels some way, then say it. I’d rather you say it than hold it in and let it come out too late.
1 week ago – via Sam Amick @ The Athletic

Storyline: Boston Celtics Turmoil?
share
tweet
send
sms
email
Marcus Smart: No, I don’t have any regrets. And I don’t have any regrets with how my teammates handled it either. I think we handled it perfectly. If you can’t talk, if you can’t yell, if you can’t express how you truly feel with somebody who’s supposed to have your back, somebody who you’re supposed to trust, and vice versa, then are you really supposed to be trusting that person? That’s the type of team we are.
1 week ago – via Sam Amick @ The Athletic

But the idea that you take that sort of a moment as a team and go to a higher place rather than going the wrong direction speaks well of all you guys, right? Marcus Smart: Yeah, and that’s why I said that we’ve grown with this experience. We’ve grown. We’ve matured. It would have been easy, and would have been understandable in some ways after that, for us to fall apart. Did you wonder (if that would happen) when you went to bed that night, after you guys had those conversations back at the hotel? And who all took part in those talks? Marcus Smart: Yeah, you know we just got together and made sure that we were on the same page. We told each other that we love each other.
1 week ago – via Sam Amick @ The Athletic