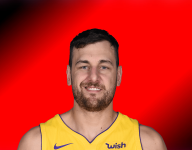 dont_shoot_jr: Why do you think Mark Jackson hasn’t gotten a coaching job? Andrew Bogut: I think everyone deserves a second chance and he will eventually get another chance. But the well noted church within a locker room I think hurts his job prospects...
3 weeks ago – via Reddit

This rumor is part of a storyline: 5926 more rumors
share
tweet
send
sms
email
Marc J. Spears: Mark Jones, Mark Jackson and Lisa Salters will be the announcing crew for @abc tonight in Game 1 of the NBA Finals and will be the first all-black TV announcing crew in Finals history. pic.twitter.com/HR0sSq79Lk
1 month ago – via Twitter MarcJSpears

ESPN analyst Jeff Van Gundy has tested positive for COVID-19 and will miss Game 1 of the NBA Finals, an ESPN official told The Athletic on Thursday. The news comes after Hall of Fame broadcaster Mike Breen missed Game 7 of the Eastern Conference finals due to COVID-19. Van Gundy was also on the broadcast team for the Heat-Celtics series. Van Gundy was scheduled to call this week’s NBA Finals for the 16th time in his career, alongside Breen, Mark Jackson and sideline reporter Lisa Salters.
1 month ago – via Joe Vardon and The Athletic Staff @ The Athletic

share
tweet
send
sms
email
Breen has called the first six games of the series between the Boston Celtics and Miami Heat. The series wraps Sunday night in Miami on ESPN, with Mark Jones stepping in for Breen alongside commentators Jeff Van Gundy and Mark Jackson. Breen said he feels well, per the spokesman, and expects to call Game 1 of the Finals, which begin Thursday.
1 month ago – via Chris Bumbaca @ USA Today Sports

share
tweet
send
sms
email
The Lakers have interviewed a total of six candidates, including Bucks assistant Charles Lee, Raptors assistant Adrian Griffin and former Warriors coach Mark Jackson. Lee and Griffin have not been ruled out as options as part of the process, sources said.
1 month ago – via Shams Charania, Sam Amick, Shams Charania and Sam Amick @ The Athletic