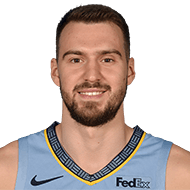 A major addition for Fenerbahce Beko with Marko Guduric back in town. The Serbian swingman inked a contract until the conclusion of the 2022-23 season, the Turkish powerhouse announced Friday morning. Guduric, 25, was a member of Fener between 2017 and 2019 assisting in capturing the BSL title in 2018 and the Turkish Cup in 2019. Both his seasons featured a Turkish Airlines EuroLeague Final Four run on the back of the 2017 championship.
2 months ago – via EuroHoops.net

The Memphis Grizzlies today announced the team signed guard Zhaire Smith (zhi-EAR) and forward Bennie Boatwright. Per team policy, terms of the deals were not disclosed. In addition, the Grizzlies waived guards Jahlil Tripp and Marko Guduric.
3 months ago – via Memphis Grizzlies @ NBA.com

Bobby Marks: Memphis makes it official on the Marko Guduric waiver. The Grizzlies will have a $2.75M cap hit for 2020/21. The roster is now down to 15 guaranteed contracts. Memphis is $1.4M below the luxury tax.
3 months ago – via Twitter BobbyMarks42

Chris Herrington: Grizzlies camp news: Mario Hezonja and Marko Guduric are not/will not be in camp with the team. They remain on the roster for now, but barring trades a buyout for both before cut-down deadline looks likely.
3 months ago – via Twitter ChrisHerrington