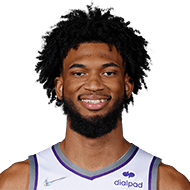 Detroit: Marvin Bagley III (migraine) has been upgraded to available for Tuesday’s game against New York.
2 days ago – via Alberto De Roa @ HoopsHype

James Edwards III: Marvin Bagley III is “probably” to make his season debut tonight against the Celtics. Burks is Questionable and Cunningham is OUT. Celtics are without Horford and Brogdon. Jaylen Brown is QUESTIONABLE.
3 weeks ago – via Twitter JLEdwardsIII

share
tweet
send
sms
email
Mike Curtis: Alec Burks (left foot) and Marvin Bagley III (right knee) have been downgraded to out for tonight’s game against the #Celtics.
3 weeks ago – via Twitter MikeACurtis2

James do you think (Marvin) Bagley starts when he comes back? If so, would you send Bogey (Bojan Bogdanovic) or Saddiq (Bey) to the bench? — @nick__xo I’m not sure if he starts immediately upon returning, but I do think the Pistons will eventually settle into a two-big starting lineup once everyone is up to speed on the health front. I believe that Detroit would have started the season with Isaiah Stewart and Marvin Bagley III had the latter not suffered an injury. The two-big lineup was the talk of the offseason and was showcased during the preseason before Bagley went down with a knee injury. Given that the Pistons have struggled to rebound on the defensive end, it feels like going a bit bigger with the starting unit is still in the cards.
3 weeks ago – via James L. Edwards III @ The Athletic